Determination of the Past Maximum Vertical Effective Stress 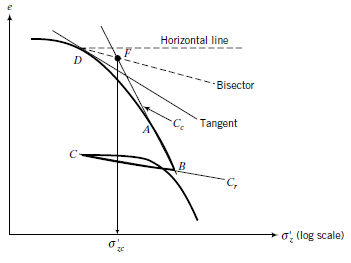 The procedure, with reference to Figure, is as follows:


1. Identify the point of maximum curvature, point D, on the initial part of the curve.
2. Draw a horizontal line through D.
3. Draw a tangent to the curve at D.
4. Bisect the angle formed by the tangent and the horizontal line at D.
5. Extend backward the straight portion of the curve (the normal consolidation line), BA, to intersect the bisector line at F.
6. The abscissa of F is the past maximum vertical effective stress, s9zc.


A simpler method that is also used in practice is to project the straight portion of the initial recompression curve to intersect the backward projection of the normal consolidation line at F, as shown in Figure The abscissa of F is s9zc. 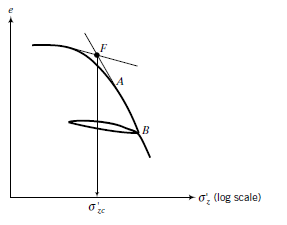 Both of these methods are based on individual judgment. The actual value of s9zc for real soils is more diffi cult to ascertain than described above. Degradation of the soil from its intact condition caused by sampling, transportation, handling, and sample preparation usually does not produce the ideal curve.