Coulomb’s frictional law for fi nding the shear strength of soils requires that we know the friction angle and the normal effective stress on the slip plane. Both of these are not readily known because soils are usually subjected to a variety of stresses. You should recall from Chapter 7 that Mohr’s circle can be used to determine the stress state within a soil mass. By combining Mohr’s circle for fi nding stress states with Coulomb’s frictional law, we can develop a generalized failure criterion.


Let us draw a Coulomb frictional failure line, as illustrated by AB in Figure 10.14, and subject a cylindrical sample of soil to principal effective stresses so that Mohr’s circle touches the Coulomb failure line. Of course, several circles can share AB as the common tangent, but we will show only one for simplicity. The point of tangency is at B [tf, (s9n)f] and the center of the circle is at O. We are going to discuss mostly the top half of the circle; the bottom half is a refl ection of the top half. The major and minor principal effective stresses at failure are (s91)f and (s93)f. Our objective is to fi nd a relationship between the principal effective stresses and f9 at failure. We will discuss the appropriate f9 later in this section. From the geometry of Mohr’s circle 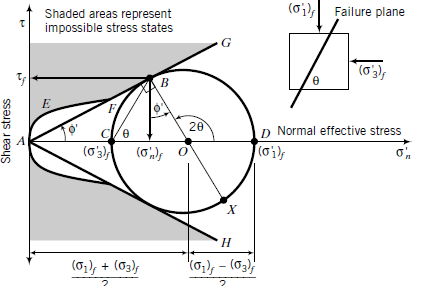 where Kp and Ka are called the passive and active earth pressure coeffi cients. In Chapter 15, we will discuss Kp and Ka and use them in connection with the analysis of earth-retaining walls. The angle BCO 5 u represents the inclination of the failure plane (BC) or slip plane to the plane on which the major principal effective stress acts in Mohr’s circle. Let us fi nd a relationship between u and f9. From the geometry of Mohr’s circle

The failure stresses (the stresses on the plane BC) are

The Mohr–Coulomb (MC) failure criterion is a limiting stress criterion, which requires that stresses in the soil mass cannot lie within the shaded region shown in Figure 10.14. That is, the soil cannot have stress states greater than the failure stress state. The shaded areas are called regions of impossible stress states. For dilating soils, the bounding curve for possible stress states is the failure envelope, AEFB. For nondilating soils, the bounding curve is the linear line AFB. The MC failure criterion derived here is independent of the intermediate principal effective stress s92, and does not consider the strains at which failure occurs