The one-dimensional consolidation test, called the oedometer test, is used to fi nd Cc, Cr, Ca, Cv, mv, and s9zc. The hydraulic conductivity, kz, can also be calculated from the test data. The experimental arrangement we used in Section 9.3 is similar to an oedometer test setup. The details of the test apparatus and the testing procedures are described in ASTM D 2435. A disk of soil is enclosed in a stiff metal ring and placed between two porous stones in a cylindrical container fi lled with water, as shown in Figure .


A metal load platen mounted on top of the upper porous stone transmits the applied vertical stress (vertical total stress) to the soil sample. Both the metal platen and the upper porous stone can move vertically inside the ring as the soil settles under the applied vertical stress. The ring containing the soil sample can be fi xed to the container by a collar (fixed ring cell, Figure  or is unrestrained (fl oating ring cell, Figure ).


At the end of the oedometer test, the apparatus is dismantled and the water content of the sample is determined. It is best to unload the soil sample to a small pressure before dismantling the apparatus, because if you remove the fi nal consolidation load completely, a negative excess porewater pressure. 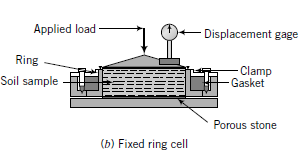 that equals the fi nal consolidation pressure will develop. This negative excess porewater pressure cancause water to fl ow into the soil and increase the soil’s water content. Consequently, the fi nal void ratio calculated from the fi nal water content will be erroneous.


The data obtained from the one-dimensional consolidation test are as follows: