Derivation of Governing Equation:
We now return to our experiment described in Section 9.3 to derive the theory for time rate of settlement using an element of the soil sample of thickness dz and cross-sectional area dA 5 dx dy (Figure).


We will assume the following:
1. The soil is saturated, isotropic, and homogeneous.
2. Darcy’s law is valid.
3. Flow only occurs vertically.
4. The strains are small.

We will use the following observations made: 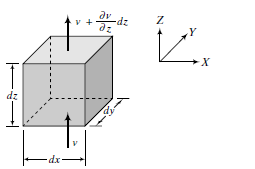 where h is the height of water in the burette.
Partial differentiation of Equation with respect to z gives

Substituting Equation  and simplifying, we obtain

where kz is the hydraulic conductivity in the vertical direction. Partial differentiation of Equation  with respect to z gives

where h is the height of water in the burette. Partial differentiation of Equation  with respect to z gives

By substitution of Equation, we get

The units for Cv are length2/time, for example, cm2/min. Rewriting Equation (9.30) by substituting Cv, we get the general equation for one-dimensional consolidation as

This equation describes the spatial variation of excess porewater pressure (Du) with time (t) and depth (z). It is a common equation in many branches of engineering. For example, the heat diffusion equation commonly used in mechanical engineering is similar to Equation  except that temperature, T, replaces u and heat factor, K, replaces Cv. Equation is called the Terzaghi one-dimensional consolidation equation because Terzaghi (1925) developed it.