The purpose of wick drains is to accelerate the consolidation settlement of soft, saturated clays by reducing the drainage path. A wick drain is a prefabricated drainage strip that consists of a plastic core surrounded by a nonwoven polypropylene geotextile jacket (Figure . The geotextile (a fi lter fabric) allows passage of water into the core that is then pumped out. A wick drain is installed by enclosing the drain in a tubular steel mandrel and supporting it at the base by an anchor plate.

The mandrel is then driven into the soil by a vibratory rig or pushed by a hydraulic rig. At the desired depth, the mandrel is removed, the drain and anchor plate remain in place, and the drain is cut off with a tail about 300 mm long. The effect of drains on the soil consolidation is illustrated in Figure . A wick drain in which one end is on an impervious boundary is called a half-closed drain (Figure ). Sometimes the drain may penetrate into a pervious layer below an impervious layer, allowing the porewater to be expelled from the top and bottom of the drain. Such a drain provides two-way drainage and would accelerate the consolidation of the soil. Recall that for one-dimensional consolidation, two-way drainage reduces the time for a given degree of consolidation by four times compared with single drainage. The governing equation for axisymmetric radial drainage is

where r is the radial distance from the center of the drain and Ch is the coeffi cient of consolidation in the horizontal or radial direction. The boundary conditions to solve Equation are: 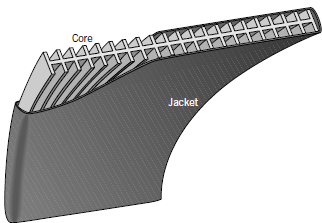 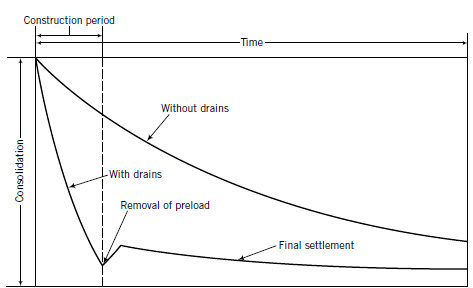 Effects of wick drains on time to achieve a given degree
of consolidation.

and the initial condition is t 5 0, u 5 uo, where rd is the radius of the drains, t is time, and R is the radius of the cylindrical infl uence zone (Figure ). Richart (1959) reported solutions for Equation (9.49) for two cases—free strain and equal strain. Free strain occurs when the surface load is uniformly distributed (fl exible foundation, Figure 9.21) and the resulting surface settlement is uneven. Equal strain occurs when the surface settlement is forced to be uniform (rigid foundation) and the resulting surface load is not uniformly distributed. Richart showed that the differences in the two cases are small and the solution for equal strain is often used in practice. The time factor for consolidation in the vertical direction is given by Equation, while the time factor for consolidation in the radial direction (Tr) is