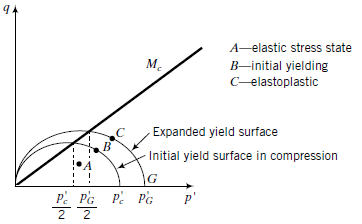 Expansion of the yield surface

Prediction of the Behavior of Normally Consolidated and Lightly Overconsolidated Soils Under Drained Condition:
Let us consider a hypothetical situation to illustrate the ideas presented so far. We are going to try to predict how a sample of soil of initial void ratio eo will respond when tested under drained condition in a triaxial apparatus, that is, a standard CD test. You should recall that the soil sample in a CD test is isotropically consolidated and then axial loads or displacements are applied, keeping the cell pressure constant. We are going to consolidate our soil sample up to a maximum mean effective stress p9c, and then unload it to a mean effective stress p9o such that Ro 5 prc /pro , 2. The limits imposed on Ro are only for presenting the basic ideas on CSM. More details on delineating lightly overconsolidated from heavily overconsolidated soils will be presented in Section.