There are two design procedures used in practice in North America. One is allowable stress design (ASD); the other is load and resistance factor design (LRFD). In ASD, the ultimate load (stress) resistance is determined, and then this is divided by a factor of safety (FS) to obtain the allowable load (stress).

The factor of safety has no fundamental basis. It is based on experience and judgment of the performance of existing foundations. ASD is the long-standing (conventional) design method. LRFD is based on reliability methods considering the uncertainties in loads, soil resistance, method of analysis, and construction. The loads are multiplied by load factors, usually greater than one in different combinations, and the ultimate soil resistance is multiplied by a factor, called the performance factor, usually less than one. The governing equation for design based on LRFD is

where r is load factor; P is load; R is resistance; w is the performance factor; h is a ductility, redundancy, and operational performance factor; and i is the load type, such as dead load or live load, and the resistance type. Codes (e.g., International Building Code, UBC), engineering organizations (e.g., American Society for Civil Engineers, ASCE), and agencies (e.g., American Association of State Highway and Transportation Offi cials, AASHTO) have their own recommendations on load and resistance factors and load combinations. In this textbook, we will consider only two types of loads, dead load (DL) and live load (LL), one load combination, and a limited set of performance factors. They are intended only to show how to apply these methods. The load factors apply only to strength. For settlement calculation, the unfactored load or allowable stress is used.


The analysis of a footing on a soil is a contact problem of two dissimilar bodies. In making such an analysis, we have to treat soil as an ideal material such as an elastic material or an elastoplastic material or a rigid–perfectly plastic material (Chapter 7). Let us consider soil as a linear elastic–perfectly plastic material (Figure 12.3a) in which the elastic response is small. We assume a strip footing (its length is much longer than its width) traps a wedge of soil, and this wedge, acted on by the footing, pushes its way downward into the soil (Figure 12.3b). If the footing were circular, it would trap a cone of soil. Centric, vertical loads are now incrementally applied on the footing. Initially, the soil will respond elastically. It will be compressed vertically and laterally (lateral outward movement). The deformation is fully contained within the soil as stored energy. If we were to unload the footing, the deformation would be recoverable. As the load increases, some regions of the soil would yield and behave plastically (plastic fl ow). The pressure at the apex of the wedge is infi nite and leads to infi nite differences in principal stresses. Thus, there will be a region around the apex that would yield immediately upon loading. If the soil were a rigid–perfectly plastic material, some regions would fl ow plastically while other regions would show no deformation. We will call the soil regions that have reached the plastic state the plastic zones. As more loads are added, the plastic zones increase and eventually break free to the surface, and soil “pileup” on the sides of the footing (Figure ). There is a transition phase 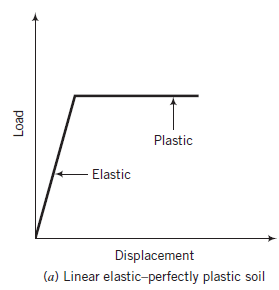 from elastic to perfectly plastic response whereby the soil behaves as an elastoplastic material and the deformation is essentially in the lateral directions. The surface between the plastic zones and the nonplastic or nondeforming zones (applicable to rigid–perfectly plastic material) is called a slip surface or limiting stress surface.