APPLICATION OF CSM TO CEMENTED SOILS

We can adopt the basic tenets of CSM to provide a framework for understanding the stress–strain and failure responses of cemented soils. In most cases, natural soils are cemented with various degrees of cementation. One cementing agent is calcium carbonate that is commonly found in groundwater. Under favorable conditions, calcium carbonate crystallizes; fi lls up some void spaces, reducing the void ratio of the uncemented soil; and bonds soil particles. Let us consider an isotropically and normally consolidated, uncemented soil with a current mean effective stress, pro (Figure ). Recall that for normally consolidated soils, prc 5 pro . The initial yield surface for the normally consolidated, uncemented soil is ABO. Now, assume that the soil becomes cemented, with the cementing agent filling a portion of the void and the soil remaining saturated. Let Cm be the ratio of the volume of the cementing agent to the total initial soil volume. Then the change in porosity is Cm and the change (decrease) in void ratio is Cm (1 1 eo ), where eo is the initial void ratio of the uncemented soil. This decrease in void ratio occurs without any change in mean effective stress, so point O on the NCL for the uncemented soil (Figure 11.43b) moves vertically downward to point O9.
The cementation has the following effects. 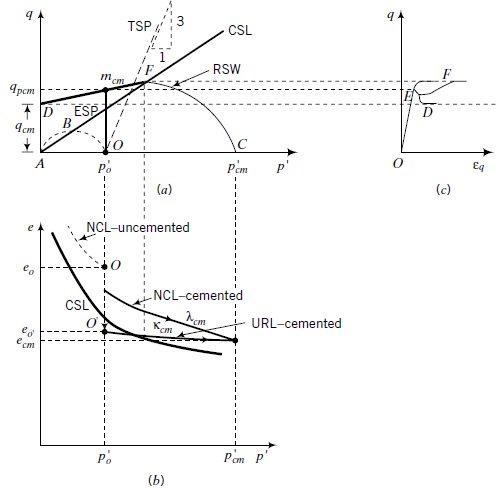 Application of CSM to cemented soils.

while from the unloading/reloading line for the cemented soil,

Subtracting Equation we get

Therefore, solving for prcm, we obtain

where mcm is the slope of the limiting stress surface. Neither mcm nor qcm is a fundamental soil parameter. They both depend on the type, amount, and distribution of the cementing agent within the soil mass. The value of mcm is found from shear tests by plotting the peak deviatoric stress versus the mean effective stress.