(1) selection of a plausible failure mechanism or failure surface,

(2) determination of the forces acting on the failure surface, and

(3) use of the equilibrium equations that you learned in statics to determine the collapse or failure load.

Let us consider a strip footing of width B, resting on the surface of homogeneous, saturated clay whose undrained strength is su (Figure ). For simplicity, we will neglect the weight of the soil. Step 1 of the limit equilibrium method requires that we either know or speculate on the failure mechanism. Since we do not know what the failure mechanism is because we have not done any testing, we will speculate that the footing will fail by rotating about the inner edge A (Figure ), so that the failure surface is a semicircle with radius B. Step 2 is to determine the forces on the failure surface. Along the circumference of the semicircle, there would be shear stresses (t) and normal stresses (sn). We do not know whether these stresses are uniformly distributed over the circumference, but we will assume that this is so; otherwise, we have to perform experiments or guess plausible distributions. Since failure occurred, the maximum shear strength of the soil is mobilized, and therefore the shear stresses are equal to the shear strength of the soil. Now we are ready to move to Step 3. The moment due to the normal force acting on the semicircle about A is zero since its line of action passes through A. The moment equilibrium equation is then 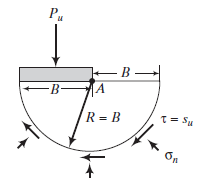 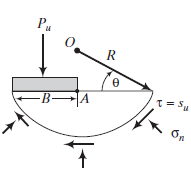 and the collapse load is

We are unsure that the collapse load we calculated is the correct one, since we guessed a failure mechanism. We can repeat the three steps above by choosing a different failure mechanism. For example, we may suppose that the point of rotation is not A but some point O above the footing such that the radius of the failure surface is R (Figure ). Taking moments about O,we get

By rearranging Equation , we get

The collapse load now depends on two variables, R and u, and as such there is a family of failure mechanisms.  We must then fi nd the least load that will produce collapse. We do this by searching for extrema (minima and maxima in curves) by taking partial derivatives of Equation with respect to R and u. Thus,

The solutions of Equations are u 5 23.28 and R 5 B sec u; that is, point O is directly above A. Substituting these values in Equation  we obtain the collapse load as

This is a better solution because the collapse load is smaller than Equation  but we need to investigate other possible mechanisms, which may yield yet a smaller value of Pu. The exact solution to our problem, using more complex analysis than the limit equilibrium method, gives

which is about 9% lower than our second mechanism.