For dense, coarse-grained soils, you can use the same approach as in Section 1 except that (1) the TSP is equal to the ESP  and (2) the HV surface is based on tests on clays. However, observations in simple shear tests (Budhu, 1984) on a dense sand show similar response to heavily overconsolidated clays. Therefore, we will assume that a similar surface is also applicable to coarse-grained soils. The limiting stresses on the LS surface (surface similar to HV) is found from the intersection of the ESP with the LS surface as follows.

where m is the slope of the LS surface;

where no is the slope of the ESP and p9yLS is the mean effective stress at the intersection of the ESP with the LS surface.
Solving Equations  for qyLS, we get 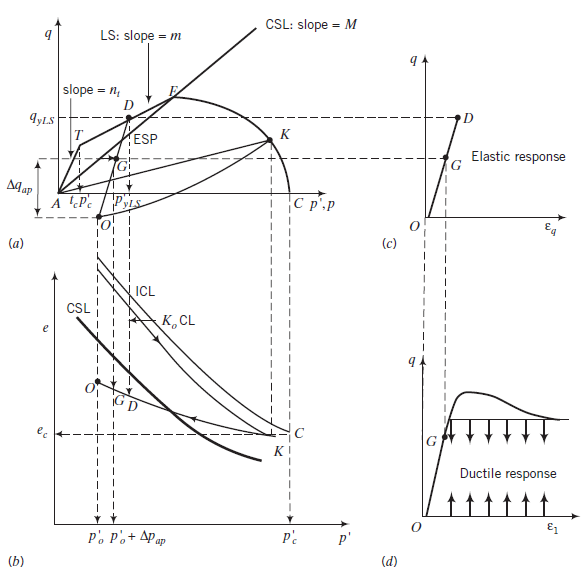 Response of a dense, coarse-grained soil to stresses
from a shallow footing.

The vertical strain for Equations  for axisymmetric condition is

The settlement, following a similar approach to that used for heavily overconsolidated clays, is

, where Iz is the infl uence factor for the vertical stress increase at a depth B/2 below the footing and