MODIFICATIONS OF CSM AND THEIR PRACTICAL IMPLICATIONS

We are going to make some simple modifi cations to CSM to improve its versatility in modeling a wide range of soil types and to establish some additional conceptual understanding of soil behavior. We considered a particular shape of the yield surface in developing the concept of critical state model. Other shapes of yield surfaces have been developed and used in predicting soil responses. For example, Schofi eld and Wroth (1968) developed a bullet-shaped yield surface using energy methods. For heavily overconsolidated soils, the peak (initial yield) shear strength occurs on the initial yield surface, which in our case is an ellipse. Experimental data from shear box tests on heavily overconsolidated clays presented by Hvorslev (1937) reveal that the locus of peak shear strength is approximately a straight line.

In considering heavily overconsolidated fi ne-grained soils, we will replace that portion of the initial elliptical yield surface on the left side of the critical state line by the straight line found by Hvorslev. This line defi nes limiting stress states and is not a yield surface, b, AT, At, and ac are lines that separate possible from impossible states; ac is the normal consolidation line; AT and At delineate limiting tensile stress states labeled TL; AF and gf are the critical state or failure lines; TF is Hvorslev’s surface, labeled HV surface. Line ct is an unloading/ reloading line. 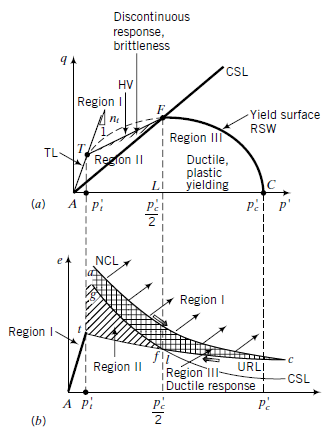 We are going to describe three regions of soil behavior.


Region I. Soil stress states within Region I are impossible. During unloading the soil cannot follow paths right of the normal consolidation line, ac (Figure 11.19b). Also, uncemented soils cannot have stress states left of the tension line, AT or At.


Region II. Soil stress states within Region II, area ATFA (Figure ), would cause the soil to behave elastically, but on approaching the HV surface it may exhibit discontinuous response and fail with one or more bifurcations. In laboratory shear tests, it has been observed that just prior to achieving the peak shear strength and during strain softening, preferential zones of dilation (shear bands, Figure ) develop. Due to progressive softening, the size of these preferential zones of dilation increases during postpeak shear deformation.

The permeability or hydraulic conductivity of the soil (especially within the shear bands or preferential zones of dilation) increases and, if water is present, this increased permeability can lead to sudden failure due to seepage (for example, fl ow slides on a slope). The presence of preferential zones of dilation as the soil mass strain-softens renders CSM inadmissible because CSM treats soils as continua. Calculations using CSM in the strain-softening regime of soil behavior cannot be expected to be accurate.

Region III. Soil stress states within Region III (AFCA, Figure 11.19a) will cause the soil to behave in a ductile manner. It is desirable to design geotechnical systems such that the soil will behave in