Prediction of the Behavior of Coarse-Grained Soils Using CSM

CSM is applicable to all soils. However, there are some issues about coarse-grained soils that require special considerations. Laboratory test data show that the NCL and CSL lines for coarse-grained soils are not well defi ned as straight lines in (ln p9, e) space (Figure ) compared to those for fi negrained soils. The particulate nature of coarse-grained soils with respect to shape, size, roughness, structural arrangement (packing), particle hardness, and stiffness often leads to localized discontinuities.

Tests using X rays on coarse-grained soils show shear banding (Figure 10.4) and nonuniform distribution of strains, even at low strains (,1%). Averaged stresses and strains normally deduced from measurements in soil test equipment cannot be relied upon to validate CSM. CSM is based on treating soils as continua, with smooth changes in stresses and strains. CSM cannot be used when shear bands occur. Other models (e.g., Coulomb or Mohr–Coulomb) may be more appropriate than CSM. However, the soil within the shear band is generally at critical state, and it is likely to behave as a viscous fl uid. 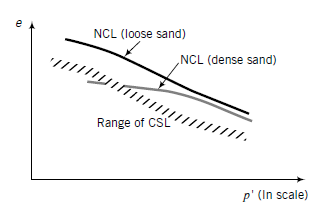 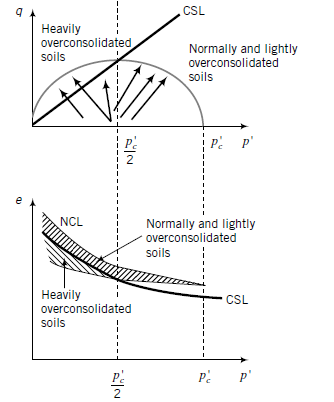