The method described in Chapter 10 can be used to calculate the primary consolidation settlement of clays below the footing. However, these equations were obtained for one-dimensional consolidation where the lateral strain is zero. In practice, lateral strains are signifi cant except for very thin layers of clays or for situations when the ratio of the layer thickness to the lateral dimension of the loaded area is small (approaches zero). We also assumed that the initial excess porewater pressure is equal to the change in applied stress at the instant the load is applied. Theoretically, this is possible if the lateral stresses are equal to the vertical stresses. If the lateral strains are zero, then under undrained condition (at the instant the load is applied), the vertical settlement is zero.

Skempton and Bjerrum (1957) proposed a method to modify the one-dimensional consolidation equation to account for lateral stresses but not lateral strains. They proposed the following equation:

where Du is the excess porewater pressure and Ho is the thickness of the soil layer. Skempton and Bjerrum suggested that the error in neglecting the lateral strains could lead to an error of up to 20% in the estimation of the consolidation settlement. Skempton’s equation (Equation 10.50) for the excess porewater pressure in a saturated soil under axisymmetric loading can be algebraically manipulated to yield

By substituting Equation , we get

where rpc is the one-dimensional primary consolidation settlement ,

is a settlement coeffi cient to account for the effects of the lateral stresses, and aSB 5 A The values of mSB typically vary from 0.6 to 1.0 for soft clays and from 0.3 to 0.8 for overconsolidated clays. Values of mSB for circular and strip footings are shown in Figure . For square or rectangular footings use an equivalent circular footing of diameter D 5 2!A/p, where A is area of the rectangle or the square. Equation  must be used appropriately. It is obtained from triaxial conditions and only applies to situations where axial symmetry occurs, such as under the center of a circular footing 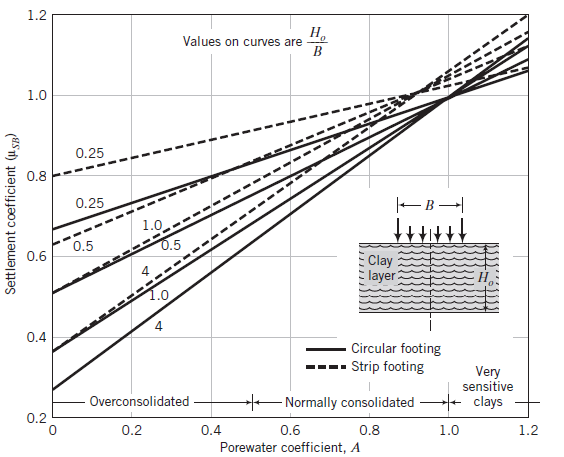 Values of mSB for circular and strip footings.
(Redrawn from Scott, 1963.)