Dividing both sides of Equation  bypro , we get

The ratio at the left-hand side of Equation  is called the normalized undrained shear strength at critical state. It is dimensionless. For triaxial compression on an isotropically consolidated soil, pro5 srz o, and Equation becomes 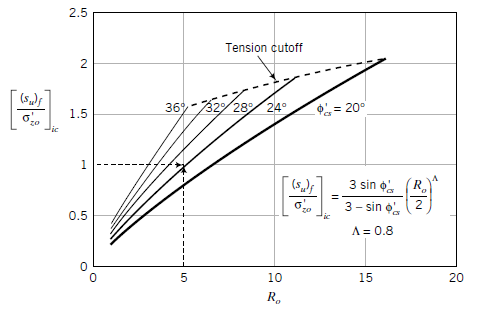 A plot of Equation (11.64) is shown in Figure  for practical ranges of L. Some soils may have L lower than 0.75, but rarely greater than 0.85. The maximum difference in the predicted undrained shear strength ratio at critical state for L between 0.75 and 0.85 is only about 10%. The subscript nc–ic refers to a normally consolidated soil from isotropic loading