1. The earth-retaining wall is vertical.
2. The interface between the wall and soil is frictionless.
3. The soil surface is horizontal and no shear stress acts on horizontal and vertical boundaries.
4. The wall is rigid and extends to an infi nite depth in a dry, homogeneous, isotropic soil mass.
5. The soil is loose and initially in an at-rest state.


Consider the wall shown in Figure . If the wall remains rigid and no movement (not even an infi nitesimal movement) occurs, then the vertical and horizontal effective stresses at rest on elements A, at the back wall, and B, at the front wall, are

Stresses on soil elements in front of and
behind a retaining wall. 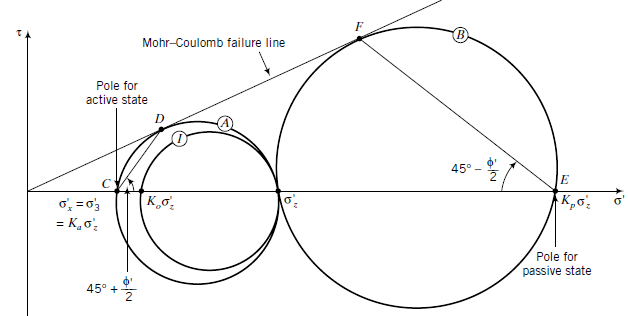 where g' is the effective unit weight of the soil and Ko is the lateral earth pressure at rest [Equation]. Mohr’s circle for the at-rest state is shown by circle I in Figure . Note that if the soil surface were not horizontal, the major and minor principal effective stresses would not be equal to the vertical and lateral effective stresses, respectively.