where G is the shear modulus, t is shear stress, and fs is the skin frictional stress. The shear strains can be integrated over the pile length to give the elastic settlement (res) resulting from skin friction; that is,

where (z) means that the parameter in front of it varies with depth. To solve Equation , we need to know how G and t vary with depth, but this we do not know. Therefore, we have to speculate on their variations and then solve Equation . A further complication arises in that the boundary conditions for a pile problem are complex. Thus, we have to solve Equation using numerical procedures. For example, we can assume that

where F(z, i) is a stress function and t(i) is the shear stress at an ordinate i. We can use fi nite element or boundary element to solve Equations .Stress functions for a point load within a half-space were developed by Mindlin (1936). For a homogeneous soil (Eso is constant with depth), a solution of Equation (13.51) using Equation for the elastic settlement of a single pile is

where I is an infl uence factor and Qaf is the design load transferred as skin friction. An approximate equation for I is

Soft soils tend to have elastic moduli that vary linearly with depth; that is, 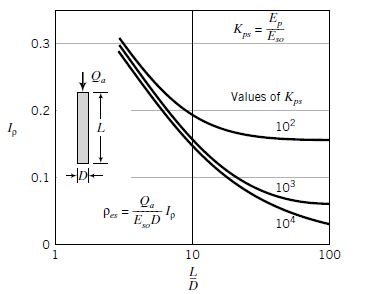 where m is the rate of increase of Eso with depth (units: kPa/m). For soft soils, the elastic settlement is

Poulos (1989) developed another solution for the elastic settlement. He showed that res for a fl oating pile can be determined from

where Ir is an infl uence factor that depends on the L/D ratio and Kps, as shown in Figure. The soil mass under a pile is subjected to compression from end bearing. We can use elastic analyses  to determine the elastic compression under the pile. For friction piles, the settlement due to end bearing is small in comparison to skin friction and is often neglected. The elastic shortening of the pile (rp) is found for column theory, which for a soil embedded in a homogeneous soil is