Infi nite slopes have dimensions that extend over great distances. The assumption of an infi nite slope simplifies stability calculations. Let us consider a clean, homogeneous, coarse-grained soil of infi nite slope, as. To use the limit equilibrium method, we must fi rst speculate on a failure or slip mechanism. We will 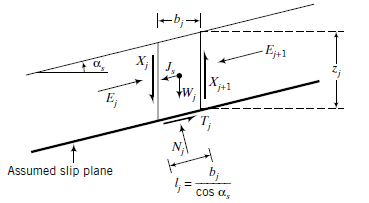 Forces on a slice of soil in an
infi nite slope.

assume that slip would occur on a plane parallel to the slope. If we consider a slice of soil between the surface of the slope and the slip plane, we can draw a free-body diagram of the slice, as shown in Figure.


The forces acting on the slice per unit thickness are the weight Wj = gbj zj, the shear forces Xj and  Xj11 on the sides, the normal forces Ej and Ej11 on the sides, the normal force Nj on the slip plane, and the mobilized shear resistance of the soil, Tj , on the slip plane. We will assume that forces that provoke failure are positive. If seepage is present, a seepage force Js = igw bj zj develops, where i is the hydraulic gradient. The sign of the seepage force depends on the seepage direction. In our case, the seepage force is positive because seepage is in the direction of positive forces. For a uniform slope of infi nite extent, Xj = Xj11 and Ej = Ej11. To continue with the limit equilibrium method, we must now use the equilibrium equations to solve the problem. But before we do this, we will defi ne the factor of safety of a slope. The factor of safety (FS) of a slope is defi ned as the ratio of the available shear strength of the soil, tf, to the minimum shear strength required to maintain stability, tm, that is,

where N9 is the normal effective force on the slip plane and Tm is the mobilized shear force. Recall that both the Coulomb and Tresca criteria are based on limit stresses where the soil is treated as a rigid-plastic material—no deformation occurs prior to reaching the limiting shear stress. Let us now use statics to solve for the factor of safety. First, we will consider a slope without seepageand groundwater below the slip plane. Because the groundwater is below the slip plane, the effective stress is equal to the total stress. From statics,

From the defi nition of factor of safety for the ESA [Equation ], we get

The implication of Equation is that the maximum slope angle of a coarse-grained soil cannot exceed f'.
We will now consider groundwater within the sliding mass and assume that seepage is parallel tothe slope. The seepage force is

Since seepage is parallel to the slope, i = sin as. From statics,

From the defi nition of factor of safety [Equation ], we get