Structures founded on piles are often subjected to lateral loads and moments in addition to vertical loads. Lateral loads may come from wind, traffi c, seismic events, waves, docking ships, and earth pressures. Moments may come from the eccentricity of the vertical force, fi xity of the superstructure to the piles, and the location of the lateral forces on the pile with reference to the ground surface. When a pile is subjected to lateral forces and moments, the pile tends to bend or defl ect, as illustrated in Figure . The defl ection of the pile causes strains in the soil mass.

To satisfy equilibrium, the soil must provide reactions along the length of the pile to balance the applied loads and moments. Because soil is a nonlinear material, the soil reaction is not linearly related to the pile defl ection. Consequently, at every point along the length of the pile, a nonlinear relationship between soil resistance (p) and pile defl ection (y) exists, as illustrated in Figure  In designing laterally loaded piles, we need to know the pile defl ection, particularly the pile head defl ection, to satisfy serviceability requirements and the bending moments for sizing the pile. The pile head defl ection depends on soil type, pile installation, pile flexibility (or pile stiffness), loading condition, 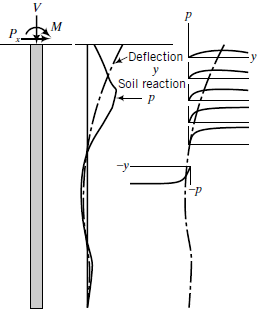 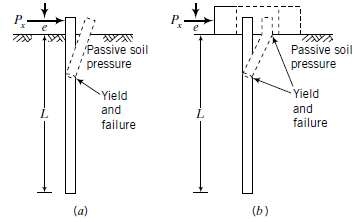 
The mechanism of failure depends on the length-to-diameter or -width ratio, soil type, and the fixity of the pile head. Free head piles tend to fail by rotation. Lateral loads and moments applied to a free head pile are initially resisted by the soil near ground level. For very small pile defl ections, the soil behaves elastically, and as the defl ection increases the soil yields, and then permanent soil displacement occurs. The soil resistance is shifted to the lower part of the pile as yielding progressively occurs from the top to the bottom of the pile. Fixed head piles tend to fail by translation. Piles in general are neither fixed head nor free head. They have undermined fi xity somewhere between free head and fi xed head conditions.

You can view fi xed head and free head as two limiting conditions in which, in practice, piles will respond somewhere within these limits. Laterally loaded piles, particularly group piles, are diffi cult to analyze, mainly because of the complexity of the soil–structure (pile) interaction. The displacements and rotations are in the directions of the resultant lateral load and resultant moment (Figure). Outer piles in a group are subjected to uplift (pull) and compressive (push) forces, while the piles in the center translate at the level of the superstructure connection. The response of a pile group to lateral loads and moments is infl uenced by 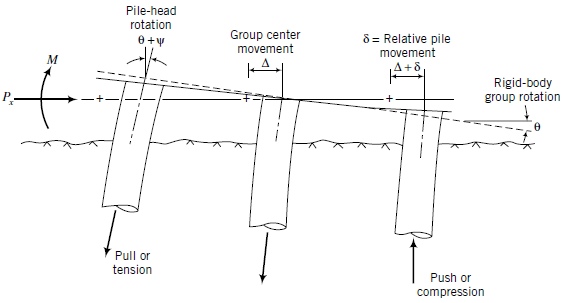