The purposes of a pile load test are:
• To determine the load capacity of a single pile or a pile group, especially when the design requires methods that are outside of accepted practice.
• To determine the settlement of a single pile at working loads.
• To verify estimated load capacity.
• To obtain information on load transfer in skin friction and in end bearing.
• To satisfy regulatory agencies.


The ASTM D 1143 provides the standard methods for conducting pile load tests. Only a brief description is presented in this section. In a typical pile load test (conventional load test), the test pile is driven to the desired depth, loads are applied incrementally, and the settlement of the pile is recorded. The axial loads can be applied by stacking sandbags on a loading frame attached to the pile or, more popularly, by jacking against a reaction beam and reaction piles (Figure ). If load transfer information is required, the pile must be instrumented with sensors or strain gages to deduce the strains and stresses along the pile length. The conventional pile load test gives the combined skin friction and end bearing resistance (Figure). They cannot be separated easily. The interpretation of the load capacity depends on the method of loading. Two loading methods are popular. In one method, called the constant rate of penetration (CRP) test, the load is applied at a constant rate of penetration of 1.25 mm/min in fi ne-grained soils and 0.75 mm/min to 2.5 mm/min in coarse-grained soils. In the other method, called the quick maintained load (QML), increments of load, about 10% to 15% of the expected design load, are applied at intervals of about 2.5 min. At the end of 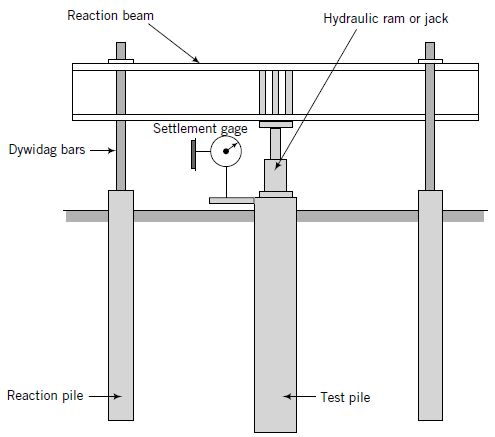 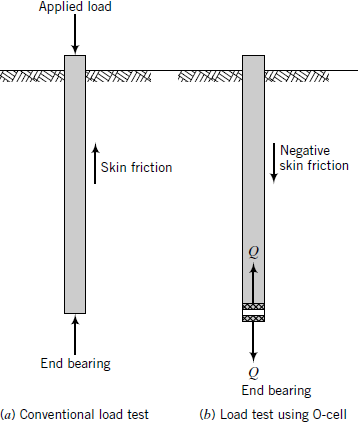