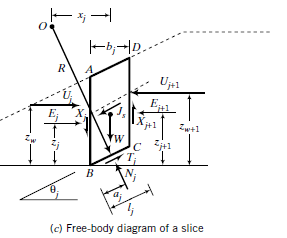 A free-body diagram of the postulated circular failure mechanism would show the weight of the soil within the sliding mass acting at the center of mass. If seepage is present, then the seepage forces, Js, which may vary along the fl ow path, are present. The forces resisting outward movement of slope are the shearing forces mobilized by the soil along the slip surface. We must now use statics to determine whether the disturbing forces and moments created by W and Js exceed the resisting forces and moments due to the shearing forces mobilized by the soil. However, we have several problems in determining the forces and moments. Here is a list.

One approach to solve our problem is to divide the sliding mass into an arbitrary number of slices and then sum the forces and moments of each slice. Of course, the larger the number of slices, the better the accuracy of our answer. Dividing the area inside the sliding mass into slices presents new problems. We now have to account for the internal forces or interfacial forces between the slices.


Let us consider an arbitrary slice, ABCD (Figure), and draw a free-body diagram of the forces acting on the slices, as illustrated in Figure. The forces have the following meaning: