TYPES OF RETAINING WALLS AND MODES OF FAILURE

There are two general classes of retaining walls. One class is rigid and consists of concrete walls relying on gravity for stability (Figure ). These are called cast-in-place (CIP) gravity and semi-gravity walls. The other class is fl exible and consists of long, slender members of either steel or concrete or wood or plastic and relies on passive soil resistance and anchors for stability.

Failure modes for rigid
retaining walls (the dotted lines show
the original position of the wall).

Seepage-induced failure is avoided in rigid retaining walls by providing adequate drainage systems, two of which are depicted in Figure . The design of drainage systems is beyond the scope of this book. Flownets,  are used in designing drainage systems.


Flexible retaining walls are often used in waterfront structures and as temporary supports for excavations. Seepage forces are generally present and must be considered in evaluating the stability of these walls. 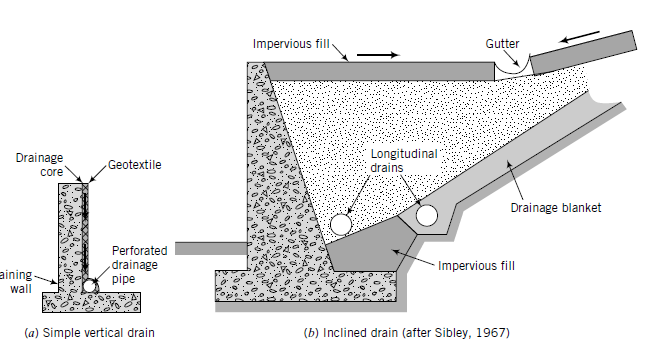