Surveying is concerned with the fixing of position whether it be control points or points of topographic detail and, as such, requires some form of reference system. The physical surface of the Earth, on which the actual survey measurements are carried out, is not mathematically definable. It cannot therefore be used as a reference datum on which to compute position.

Alternatively, consider a level surface at all points normal to the direction of gravity. Such a surface would be closed and could be formed to fit the mean position of the oceans, assuming them to be free from all external forces, such as tides, currents, winds, etc. This surface is called the geoid and is defined as the equipotential surface that most closely approximates to mean sea level in the open oceans.An equipotential surface is one from which it would require the same amount of work to move a given mass to infinity no matter from which point on the surface one started. Equipotential surfaces are surfaces of equal potential; they are not surfaces of equal gravity.

The most significant aspect of an equipotential surface going through an observer is that survey instruments are set up relative to it. That is, their vertical axes are in the direction of the force of gravity at that point. A level or equipotential surface through a point is normal, i.e. at right angles, to the direction of gravity. Indeed, the points surveyed on the physical surface of the Earth are frequently reduced, initially, to their equivalent position on the geoid by projection along their gravity vectors.

The reduced level or elevation of a point is its height above or below the geoid as measured in the direction of its gravity vector, or plumb line, and is most commonly referred to as its height above or below mean sea level (MSL). This assumes that the geoid passes through local MSL, which is acceptable for most practical purposes. However, due to variations in the mass distribution within the Earth, the geoid, which although very smooth is still an irregular surface and so cannot be used to locate position mathematically. The simplest mathematically definable figure which fits the shape of the geoid best is an ellipsoid formed by rotating an ellipse about its minor axis. Where this shape is used by a country as the surface for its mapping system, it is termed the reference ellipsoid. Figure  illustrates the relationship between these surfaces. 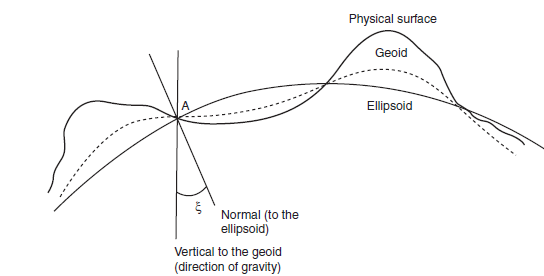 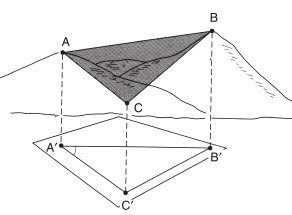 Projection onto a plane surface

It can be seen from the above that the only measurements needed in plane surveying are angle and distance. Nevertheless, the full impact of modern technology has been brought to bear in the acquisition and processing of this simple data. Angles may now be resolved with single-second accuracy using optical and electronic theodolites; electromagnetic distance measuring (EDM) equipment can obtain distances up 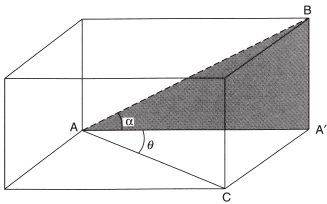 to several kilometres with millimetre precision, depending on the distance measured; lasers and northseeking gyroscopes are virtually standard equipment for tunnel surveys; orbiting satellites are being used for position fixing offshore as well as on; continued improvement in aerial and terrestrial photogrammetric and scanning equipment makes mass data capture technology an invaluable surveying tool; finally, data loggers and computers enable the most sophisticated procedures to be adopted in the processing and automatic plotting of field data.