The process involved in carrying out the surveying of an area, the capture and processing of the field data, and the subsequent production of a plan or map, will now be outlined briefly. The first and obvious step is to know the purpose and nature of the project for which the surveys are required in order to assess the accuracy specifications, the type of equipment required and the surveying processes involved.


For example, a major construction project may require structures, etc., to be set out to subcentimetre accuracy, in which case the control surveys will be required to an even greater accuracy. Earthwork volumes may be estimated from the final plans, hence contours made need to be plotted at 2 m intervals or less.

If a plan scale of 1/500 is adopted, then a plotting accuracy of 0.5 mm would represent 0.25 m on the ground, thus indicating the accuracy of the final process of topographic surveying from the supplementary control and implying major control to a greater accuracy. The location of topographic data may be done using total stations, GPS satellites, or, depending on the extent of the area, aerial photogrammetry. The cost of a photogrammetric survey is closely linked to the contour interval required and the extent of the area. Thus, the accuracy of the control network would define the quality of the equipment and the number of observations required.

This latter process locates all existing control in the area of interest, both local and national, and establishes the final positions for all the new control required. These final positions should be chosen to ensure clear, uninterrupted lines of sight and the best observing positions. The location of these points, and
the type of terrain involved, would then influence the method of survey to be used to locate their spatial position.


Figure  indicates control points A, B, … , F, in the area to be surveyed. It is required to obtain the coordinate positions of each point. This could be done using any of the following methods: 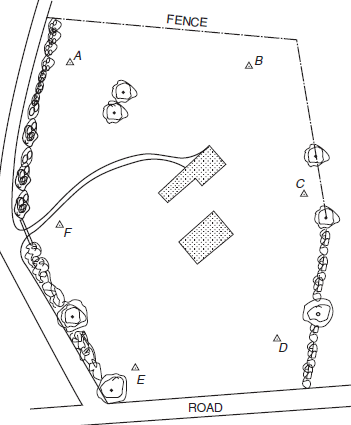 If the lengths of all the sides were measured in the same triangular configuration without the angles this technique would be called ‘trilateration’. Although giving excellent control over scale error, swing errors may occur. For local precise control surveys the modern practice therefore is to use a combination of angles and distance. Measuring every angle and every distance, including check sights wherever possible, would give a very strong network indeed. Using sophisticated least squares software it is now possible to optimize the observation process to achieve the accuracies required.