The common concept of a line through the North and South Poles comprising the spin axis of the Earth is not acceptable as part of a coordinate system, as it is constantly moving with respect to the solid body of the Earth. The instantaneous North Pole wanders once around the International Reference Pole (IRP) in a period of about 14 months with a distance from the IRP of about 20 metres. The IRP has been defined, and internationally agreed, by the International Earth Rotation Service (IERS) based in Paris. Similarly, the Greenwich Meridian adopted is not the one passing through the centre of the observatory telescope. 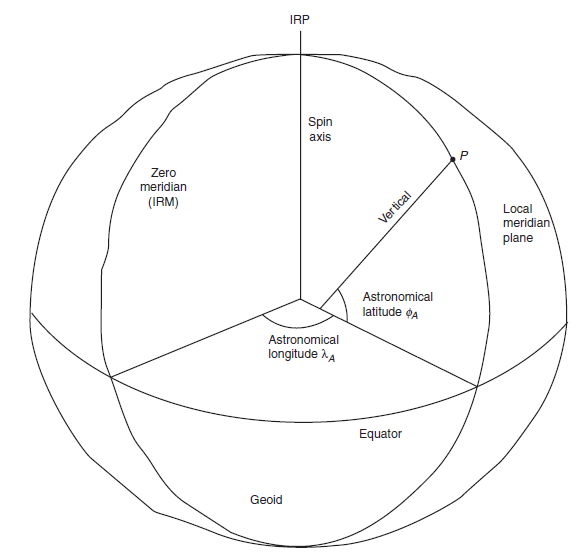 It is one defined as the mean value of the longitudes of a large number of participating observatories throughout the world and is called the IERS Reference Meridian (IRM).

Astronomical position is found from observations to the sun and stars. The methods for doing so are relatively complex, seldom practised today and therefore outside the scope of this book. Astronomical latitude and longitude do not define position on the Earth’s surface but rather the direction and inclination of the vertical through the point in question. Due to the undulation of the equipotential surface deviation of the vertical varies from point to point so latitude and longitude scales are not entirely regular. An astronomical coordinate system is therefore unsatisfactory for precise positionin.