In surveying nothing is ever absolutely certain. The product of surveying may be thought of as being in two parts, that is, the derivation of the desired quantities such as coordinates of, or distances between, points, and the assessment and management of the uncertainty of those quantities. In other words not only must the survey results be produced, but there should be numerical statements of the quality of the results for them to be meaningful. Survey results can never be exactly true for a number of reasons. Surveying equipment, like any other piece of equipment in the real world can only be manufactured to a certain level of precision.

This means that there is a limit upon the quality of a measurement that can be made by any instrument. Although survey measuring procedures are designed to remove as many errors as possible there will always be some sources of error that cannot be compensated for. Whatever the scale on the instrument, be it digital or analogue, there is a limit to the number of significant digits that it can be read to. Surveyors are trained to get the most out of their instrumentation, but no observer can make perfect measurements.

There is a limit to the steadiness of the hand and the acuity of the eye. All survey measurements are subject to external factors, for example all observed angles are subject to the effects of refraction, and observed distances, whether EDM or tape, will vary with temperature. The process of getting from observations to coordinates involves reductions of, and corrections to, observed data. Some mathematical formulae are rigorous, others are approximate. These approximations and any rounding errors in the computations will add further error to the computed survey results.

Accuracy can be estimated from ‘residuals’, for example, in the two sets of measurements below, which mean is the more accurate, that of the measurements of line AB or line XY? 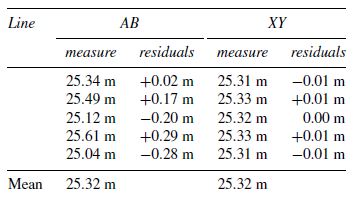 The residuals in this case are differences between the individual observations and the best estimate of the distance, that is the arithmetic mean. It is clear from inspection of the two sets of residuals that the length of line XY appears to be more accurately determined than that of line AB. Precision is a measure of repeatability. Small residuals indicate high precision, so the mean of line XY is more precisely determined than the mean of line AB. High precision does not necessarily indicate high accuracy. For example, if the tape used to measure line XY was in decimals of a yard and the surveyor assumed it was in metres, then the computed mean of line XY would be very precise but also very inaccurate.

The coordinates of a new control station on a construction site may have been determined by a series of observations including some to the GPS station. The precision of the coordinates of the new station may better be expressed with respect to the OSTN02 datum, or alternatively with respect to the coordinates of another survey station on site. In the former case they may be considered as absolute and in the latter as relative. The difference between absolute and relative precisions is largely one of local definition and therefore of convenience. In general.