The many systems established by various countries throughout the world for positioning on and mapping of the Earth’s surface were established with an astrogeodetic origin to the datum. In the UK the origin of the datum for the Ordnance Survey is at Herstmonceux in Sussex. The origin of the datum for the European system is at Potsdam and the origin of the datum for North America is at Meades Ranch in Kansas. At each of these origins the relationship between the geoid and ellipsoid is defined in terms of the tangential planes between the respective surfaces. Such systems use reference ellipsoids which most closely fit the geoid in their area of coverage and are defined by the following eight parameters:


Satellite datums or datums that are required for global use may be defined as follows.


It follows that all properly defined geodetic systems will have their axes parallel and can be related to each other by simple translations in X, Y and Z.
The goodness of fit can be indicated by an examination of values for the deviation of the vertical (ξ ) and geoid–ellipsoid separation (N), as indicated in Figure Consider a meridian section through the geoid–ellipsoid (Figure , it is obvious that the north–south component of the deviation of the vertical. 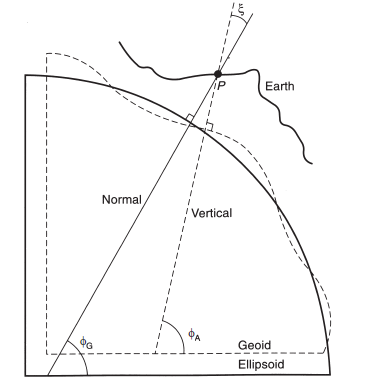