Establishing control networks and their subsequent computation leads to an implied rectangular coordinate system over the area surveyed. The minor control points in particular can now be used to position topographic data and control the setting out of a construction design. The methods of topographic survey and dimensional control will most probably be:


(a) by polar coordinates (distance and bearing) using a total station; or
(b) by GPS using kinematic methods.

The field data would comprise the horizontal angle baP1(α1) and the horizontal distance D1 . Depending on the software being used, the angle α1 would be used to compute the bearing aP1 relative to ‘ab’ and, with the horizontal distance D1, compute the rectangular coordinates of P1 in the established coordinate system. This process is repeated for the remaining points defining the road edge and any other topographic data within range of the total station. The whole area would be surveyed in this way by occupying pairs of control points situated throughout the area. 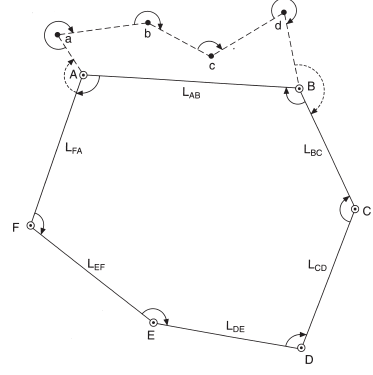 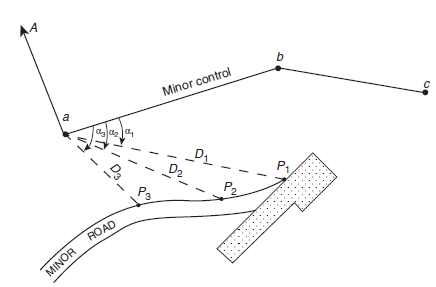 For method (b), using GPS equipment, the methods are dealt with : Satellite positioning.

Afurther development is the integration of a total station with GPS. This instrument, produced by Leica Geosystems and called SmartStation, provides the advantages of both the systems (a) and (b). If using existing control, the local coordinate data is copied into the SmartStation and used in the usual manner on existing pairs of control points. Where the GPS cannot be used because of excessive tree cover for instance, then the total station may be used in the usual way. 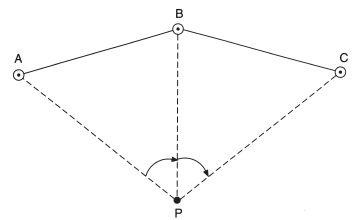