Geodetic surveys required to establish ellipsoidal or cartesian coordinates of points over a large area require very high precision, not only in the capture of the field data but also in their processing. The mathematical models involved must of necessity be complete and hence are quite involved. To avoid this the area of interest on the ellipsoid of reference, if of limited extent, may be regarded as a plane surface alternatively the curvature may be catered for by the mathematical projection of ellipsoidal position onto a plane surface.


These coordinates in the UK are termed eastings (E) and northings (N) and are obtained from:


How this is done is discussed in later sections of this chapter. 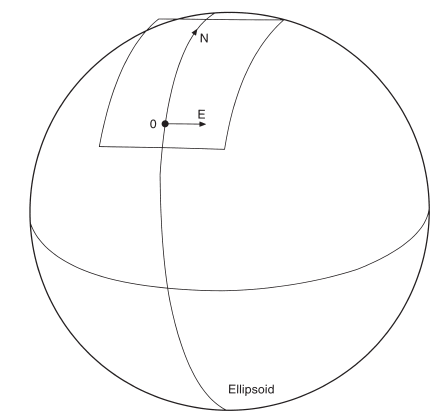 The result is the definition of position by plane coordinates (E, N) which can be utilized using plane trigonometry. These positions will contain some distortion compared with their position on the ellipsoid, which is an inevitable result of projecting a curved surface onto a plane. However, the overriding advantage is that only small adjustments need to be made to the observed field data to produce the plane coordinates. Figure illustrates the concept involved and shows the plane tangential to the ellipsoid at the local origin 0.

Generally, the projection, used to transform observations in a plane reference system is an orthomorphic projection, which will ensure that at any point in the projection the scale is the same in all directions. The result of this is that, for small areas, shape and direction are preserved and the scale varies but only slightly. Thus when computing engineering surveys in such a reference system, the observed distance, when reduced to its horizontal equivalent at MSL, simply requires multiplication by a local scale factor, and observed horizontal angles generally require no further correction