Consideration of Figure 8.1 illustrates that if the area under consideration is of limited extent, the orthogonal projection of AB onto a plane surface may result in negligible distortion. Plane surveying techniques could be used to capture field data and plane trigonometry used to compute position. This is the case in the majority of engineering surveys. However, if the area extended from C to D, the effect of the Earth’s curvature is such as to produce unacceptable distortion if treated as a flat surface.

It can also be clearly seen that the use of a plane surface as a reference datum for the elevations of points is totally unacceptable. If Figure  is now considered, it can be seen that projecting CD onto a surface (cd) that was the same shape and parallel to CD would be more acceptable. Further, if that surface was brought closer to CD, say cd, the distortion would be even less. This then is the problem of the geodetic surveyor: that of defining a simple mathematical surface that approximates to the shape of the area under consideration and then fitting and orientating it to the Earth’s surface. The surface used in surveying is a ‘reference ellipsoid’. Before describing the reference ellipsoid, it is appropriate to review the other surfaces that are related to it.

Projection to a plane surface 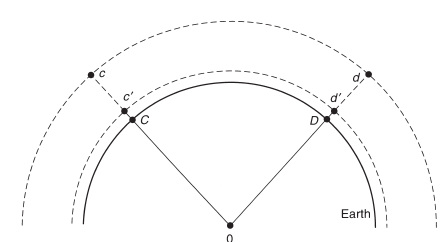 Projection to a curved surface

Earth’s surface:
The Earth’s physical surface is where surveying observations are made and points are located. However, due to its irregular surface and overall shape, the physical surface cannot be defined mathematically and so position cannot be easily computed on its surface. It is for this reason that in surveys of limited extent, the Earth may be assumed to be flat, and plane trigonometry used to define position.


An implication of this assumption is that the surface which defines the ‘zero of height’ is a plane surface and that everywhere, on that plane surface, above it and below it all plumb lines are straight and parallel. In the real world this is not true because the Earth is not flat but round, and being round it is not a sphere or any other regular mathematical figure. Although a defined surface, such as ‘Mean Sea Level’ (MSL) can be approximated by an ellipsoid there are separations from the best globally fitting ellipsoid of the order of 100 m or 1 part in 60 000. In relative terms these errors appear small, but for topographic surveying they may, and for geodetic surveying they must, be taken into consideration. Gravity below, on, or above any point on the Earth’s surface may be described by a vector.

The force of gravity, i.e. its magnitude, varies largely with distance from the Earth’s mass centre, and to a lesser extent with latitude. It is also affected by the variations in the distribution of the Earth’s mass and the changes in its density. The ‘shape’ of the Earth is largely defined by gravity. The Earth is mostly a molten mass with a very thin stiff crust some 30 km thick. If the Earth was truly molten, of homogeneous density, and not affected by the gravity field of any external bodies and did not rotate on its own axis (once a day), then through considerations of gravitational attraction, the surface of the Earth would be fully described as a sphere.