RELIABILITY OF THE OBSERVATIONS

Where there are many more observations than the strict minimum necessary needed to solve for the unknown coordinates then all the observations give a degree of independent check to each other. Where only the minimum number of observations has been made then there is no independent check upon those observations and they will all be unreliable in the sense that if one or more of them are grossly in error there is no way that the error can be detected. Hence any coordinates computed using a grossly erroneous observation will also be grossly in error. Figure 7.12 illustrates the problem where points A and B are fixed and points C and D are to be found. 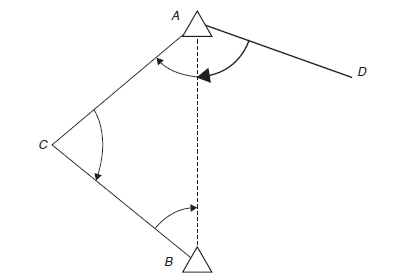 It will be noted that this matrix has already been computed as part of the process needed to compute the variance-covariance matrix of the residuals and so very little extra work will be required. In this matrix the leading diagonal contains the squares of the standard errors of the estimated observations and the off-diagonal terms are the covariances between them. It is only the leading diagonal that is likely to be needed.

Although totally unreliable observations may be identified, all observations have different levels of reliability in the network solution. If the ratio of the variances of the computed and observed values of the observation is calculated then this ratio may be tested in an ‘F test’ to determine its statistical significance. This may be tedious for all observations, and a general rule of thumb is that the relationship: