An ellipsoid of rotation is the closest mathematically definable shape to the figure of the Earth. Its shape is modelled by an ellipse rotated about its minor axis and the ellipse may be defined by its semi-major axis a and the flattening f . Although the ellipsoid is merely a shape and not a physical reality, it represents a smooth surface for which formulae can be developed to compute ellipsoidal distance, azimuth and ellipsoidal coordinates. Due to the variable shape of the geoid, it is not possible to have a single global ellipsoid of reference which is a good fit to the geoid for use by all countries. The best-fitting global geocentric ellipsoid is the Geodetic Reference System 1980 (GRS80), which has the following dimensions:


The most precise global geoid is the Earth Gravitational Model 1996 (EGM96). However, it still remains a complex, undulating figure which varies from the GRS80 ellipsoid by more than 100 m in places. In the UK the geoid–ellipsoid separation is as much as 57 m in the region of the Hebrides. As a 6-m vertical 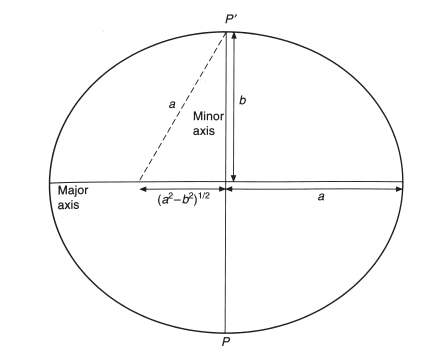 Elements of an ellipse


Figure  illustrates the relationship of all three surfaces. It can be seen that if the geoid and ellipsoid were parallel at A, then the deviation of the vertical would be zero in the plane shown. If the value for geoid–ellipsoid separation (N) was zero, then not only would the surfaces be parallel, they would also be tangential at the point. As the ellipsoid is a smooth surface and the geoid is not, perfect fit can never be achieved. However, the values for deviation of the vertical and geoid–ellipsoid separation can be used as indicators of the closeness of fit.