Having rejected the physical surface of the Earth as a computational surface, one is instinctively drawn to a consideration of a mean sea level surface. This is not surprising, as 70% of the Earth’s surface is ocean. If these oceans were imagined to flow in interconnecting channels throughout the land masses, then, ignoring the effects of friction, tides, wind stress, etc., an equipotential surface, approximately at MSL would be formed. An equipotential surface is one on which the gravitational potential is the same at all points.

It is a level surface and like contours on a map which never cross, equipotential surfaces never intersect, they lie one within another as in Figure  Such a surface at MSL is called the ‘geoid’. It is a physical reality and its shape can be measured. Although the gravity potential is everywhere the same the value of gravity is not. The magnitude of the gravity vector at any point is the rate of change of the gravity potential at that point. The surface of the geoid is smoother than the physical surface of the Earth but it still contains many small irregularities which render it unsuitable for the mathematical location of planimetric position. These irregularities are due to mass anomalies throughout the Earth. In spite of this, the geoid remains important to the surveyor as it is the surface to which all terrestrial measurements are related. 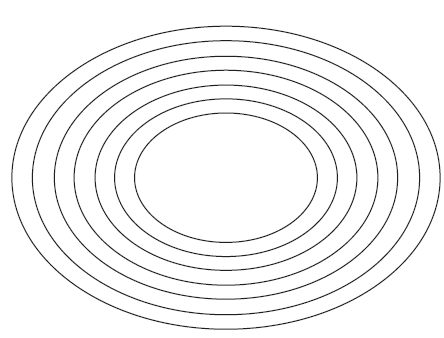 and the heights in question, referred to as heights above or below MSL. It can be seen from this that orthometric heights are datum dependent. Therefore, elevations related to the Newlyn datum cannot be related to elevations that are relative to other datums established for use in other countries. The global MSL varies from the geoid by as much as 3 m at the poles and the equator, largely because the density of sea water changes with its temperature, and hence it is not possible to have all countries on the same datum.