Many structures in civil engineering consist of steel or reinforced concrete columns supporting floor slabs. As the disposition of these columns is inevitably that they are at right angles to each other, the use of a grid, where the grid intersections define the position of the columns, greatly facilitates setting out. It is
possible to define several grids as follows:


(1) Survey grid: the rectangular coordinate system on which the original topographic survey is carried out and plotted.


(2) Site grid: defines the position and direction of the main building lines of the project.

The best position for such a grid can be determined by simply moving a tracing of the site grid over the original plan so that its best position can be located in relation to the orientation of the major units designed thereon. In order to set out the site grid, it may be convenient to translate the coordinates of the site grid to those of the survey grid using the well-known transformation formula: 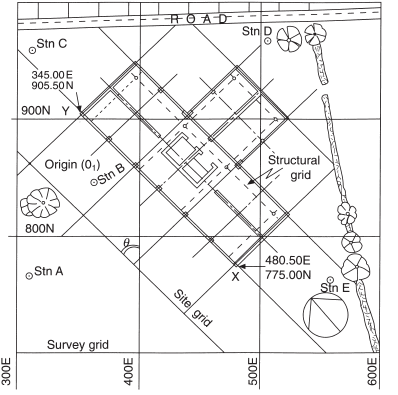 Thus, selected points, say X and Y may have their site-grid coordinate values transformed to that of the survey grid and so set-out by polars or intersection from the survey control. Now, using XY as a baseline, the site grid may be set out using theodolite and steel tape, all angles being turned off on both faces and grid intervals carefully fixed using the steel tape under standard tension. When the site grid has been established, each line of the grid should be carefully referenced to marks fixed clear of the area of work. As an added precaution, these marks could be further referenced to existing control or permanent, stable, on-site detail.


(3) Structural grid: used to locate the position of the structural elements within the structure and is physically established usually on the concrete floor slab. It may be used where the relative positions of points are much more important than the absolute positions, such as for the holding down bolts of a steel frame structure. The advantages of such a grid are that the lines of sight are set out in a regular pattern and so can be checked by eye even for small errors and that there is more check on points set out from the grid than if those points were set out individually by bearing and distance or by coordinates from a total station.