two points A and B at exactly the same level. An instrument set up at X would give a horizontal line of sight through X. If a graduated levelling staff is held vertically on A the horizontal line would give the reading A. Theoretically, as B is at the same level as A, the staff reading should be identical (B). This would require a level line of sight; the instrument, however, gives a horizontal line and a reading at B (ignoring refraction). Subtracting vertical height AA from BB indicates that point B is lower than point A by the amount BB. This error (c) is caused by the curvature of the Earth and its value may be calculated as follows:
With reference to Figure, in which the instrument heights are ignored and the earth is assumed to be sperical with a radius of R:

As both c and the instrument heights have relatively small values the distance XB may be assumed equal to the arc distance XB = D. Therefore

Now as c is very small compared with R, c2 may be ignored, giving

Taking the distance D in kilometres and an average value for R equal to 6370 km, we have

with the value of c in metres, when D is in kilometres.
In practice the staff reading in Figure would not be at B but at Y due to refraction of the line of sight through the atmosphere. In general it is considered that the effect is to bend the line of sight down, 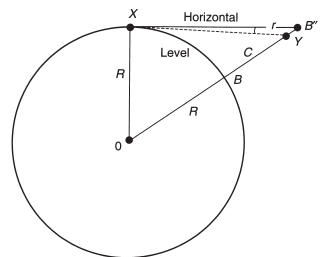 Thus if D is 122 m the value of (c − r) is only 1 mm. So in tertiary levelling, where the length of sights are generally 25–30 m, the effect may be ignored.
It should be noted that although the effect of refraction has been shown to bend the line of sight down by an amount equal to 1/7th that of the effect of curvature, this is a most unreliable assumption for precise levelling.


Refraction is largely a function of atmospheric pressure and temperature gradients, which may cause the bending to be up or down by extremely variable amounts.

There are basically three types of temperature gradient (dT/dh):
(1) Absorption: occurs mainly at night when the colder ground absorbs heat from the atmosphere. This causes the atmospheric temperature to increase with distance from the ground and dT/dh > 0.


(2) Emission: occurs mainly during the day when the warmer ground emits heat into the atmosphere, resulting in a negative temperature gradient, i.e. dT/dh < 0.
(3) Equilibrium: no heat transfer takes place (dT/dh = 0) and occurs only briefly in the evening and morning.