Height network:
Before dealing with observation equations that need to be linearized, it is worth examining the simple case of a one-dimensional height network. In Figure point A is a datum point and its height is considered fixed. Levelling has been undertaken between the other points in order to find the heights of points X, Y and Z. The six observations are hAX, hAY , hAZ, hYX, hZX and hZY . hA is the height of point A, etc. The six equations linking the observations of height difference with the parameters, the heights of the 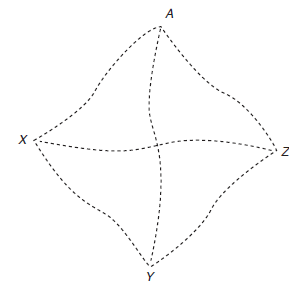 v1 is the residual associated with the first observation, etc. Since the height of A is known, these equations can be rewritten to leave only the unknowns on the left-hand side of the equations.

and this may be expressed in matrix terms as:

This is in the form: