An alternative to the use of wire methods is the gyro-theodolite. This is a north-seeking gyroscope integrated with a theodolite, and can be used to orientate underground base lines relative to true north.

There are two main types of suspended gyroscope currently available, the olderWild GAK1 developed in the 1960s–70s, which requires careful manual handling and observing to obtain orientation and the more modern Gyromat 3000 which is very much more automated. There are still many GAK1s available on the second-hand market. The gyroscope will be explained with respect to the Wild GAK1 and at the end of this section the Gyromat 3000 will be described.


The GAK1 consists of a spinner that is mounted in a mast, which in turn is suspended by a fine wire, or tape, from a fixed point near the top of the gyro frame. The spinner is simply a cylinder of metal mounted on an axle which, in turn, is held by the mast. The mast is merely a carriage for the spinner. The spinner is driven by a small electric motor at a design angular rate of 22 000 rpm. To avoid damage during transit. 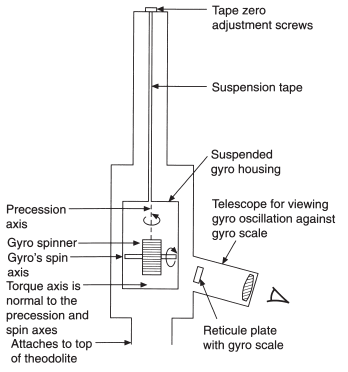 and during running up and slowing down of the spinner, the mast is held against the body of the gyro housing by a clamp at the gyro base. When the gyro is operating the clamp is released and the mast and spinner as a complete unit hang suspended.

This system then oscillates slowly about its vertical axis. The amount of movement is detected by observing the shadow of a mark in a part of the optical train in the mast. The shadow is projected onto a ground glass scale that may be read directly. Figure shows a GAK1 mounted on aWild T2 theodolite