Levelling is the most widely used method for obtaining the elevations of ground points relative to a reference datum and is usually carried out as a separate procedure from that used for fixing planimetric position.

Level line:
A level line or level surface is one which at all points is normal to the direction of the force of gravity as defined by a freely suspended plumb-bob. As already indicated in Chapter 1 in the discussion of the geoid, such surfaces are ellipsoidal in shape. Thus in Figure 3.1 the difference in level between A and B is the distance AB, provided that the non-parallelism of level surfaces is ignored.

Datum:
A datum is any reference surface to which the elevations of points are referred. The most commonly used datum is that of mean sea level (MSL).

In the UK the MSLdatum was measured and established by the Ordnance Survey (OS) of Great Britain, and hence it is often referred to as Ordnance Datum (OD). It is the mean level of the sea at Newlyn in Cornwall calculated from hourly readings of the sea level, taken by an automatic tide gauge over a six-year period from 1 May 1915 to 30 April 1921. The readings are related to the Observatory Bench Mark, which is 4.751 m above the datum. Other countries have different datums; for instance, Australia used 30 tidal observatories, interconnected by 200 000 km of levelling, to produce their national datum, whilst just
across the English Channel, France uses a different datum, rendering their levels incompatible with those in the UK. 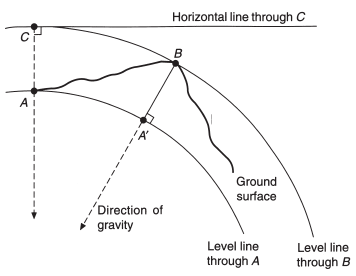 Bench mark (BM):
In order to make OD accessible to all users throughout the country, a series of permanent marks were established, called bench marks. The height of these marks relative to OD has been established by differential levelling and until about 1970 was regularly checked for any change in elevation.


(1) Cut bench marks The cut bench mark is the most common type of BM and is usually cut into the vertical surface of a stable structure .


(2) Flush brackets Flush brackets are metal plates, 180mm×90 mm, cemented into the face of buildings and were established at intervals of about 2 km.


In the UK, FBMs were established by precise geodetic levelling, at intervals of about 50 km. Each mark consists of a buried chamber containing two reference points, whilst the published elevation is to a brass bolt on the top of a concrete pillar .


Rivet and pivot BMs are also to be found in horizontal surfaces. Details of BMs within the individual’s area of interest may be obtained in the form of a Bench Mark List from the OS. Their location and value are currently also shown on OS plans at the 1/2500 and 1/1250 scales. Their values are quoted as precise to the nearest 12 mm relative to neighbouring bench marks at the time of the original observation only. Bench marks established by individuals, other than the OS, such as engineers for construction work, are called temporary bench marks (TBM). 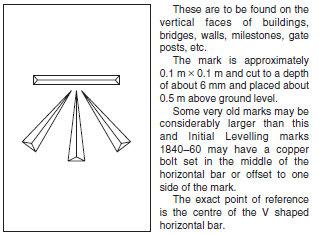