Although these methods, which involve the use of wires hanging vertically in a shaft, are rapidly being superseded by gyroscopic methods, they are still widely used and are described herewith. The basic concept is that wires hanging freely in a shaft will occupy the same position underground that they do at the surface, and hence the bearing of the wire plane will remain constant throughout the shaft.

Weisbach triangle method:
This appears to be the most popular method in civil engineering. Two wires, W1 and W2, are suspended vertically in a shaft forming a very small base line . The principle is to obtain the bearing and coordinates of the wire base relative to the surface base. These values can then be transferred to the underground base. In order to establish the bearing of the wire base at the surface, it is necessary to compute the angle WsW2W1 in the triangle as follows:

As theWeisbach triangle is formed by approximately aligning theWeisbach station Ws with the wires, the angles at Ws and W2 are very small and equation may be written:

The expression is accurate to seven figures when ˆWs < 18 and to six figures when ˆWs < 45.), it can be seen that the observational error in angle Ws will be multiplied by the fraction w2/ws. Its effect will therefore be reduced if w2/ws is less than unity. Thus the theodolite atWs should be as near the front wire W1 as focusing will permit and preferably at a distance smaller than the wire base W1W2. 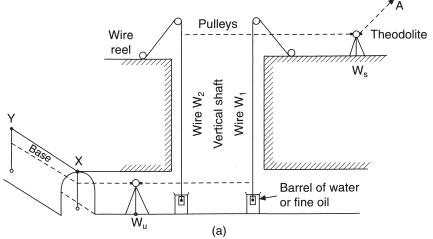 The following example, using simplified data, will now be worked to illustrate the procedure. With reference to), the following field data are obtained:

Solution of the surfaceWeisbach triangle: