Underground surveying is quite different from surveying on the surface. In tunnelling or mining operations it may be hot, wet, dark, cramped, dusty, dirty and dangerous, and usually most of these.


If entry to the underground tunnel system is via an inclined shaft, then the surface survey may simply be extended and continued down that shaft and into the tunnel, usually by the method of traversing. Extra care would be required in the measurement of the horizontal angles due to the steeply inclined sights involved and in the temperature corrections to the taped distances due to the thermal gradients encountered. If entry is via a vertical shaft, then optical, mechanical or gyroscopic methods of orientation are used.


Where the shaft is shallow and of relatively large diameter the bearing of a surface line may be transferred to the shaft bottom by theodolite . The surface stations A and B are part of the control system and represent the direction in which the tunnel must proceed. They would usually be established clear of ground movement caused by shaft sinking or other factors. Auxiliary stations c and d are very carefully aligned with A and B using the theodolite on both faces and with due regard to all error sources. The relative bearing of A and B is then transferred to AB at the shaft bottom by direct observations. Once again these observations must be carried out on both faces with the extra precautions advocated for steep sights.


If the coordinates of d are known then the coordinates of B could be fixed by measuring the vertical angle and distance to a reflector at B. It is important to understand that the accurate orientation bearing of the tunnel is infinitely more critical than the coordinate position. For instance, a standard error of 1 in transferring the bearing down the shaft to AB would result in a positional error at the end of 1 kmof tunnel drivage of 300mmand would increase to 600 mm after 2 km of drivage. 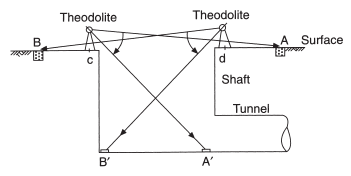 Transfer alignment to bottom of a wide shaft