The instrument is set up and correctly levelled in order to make the line of sight through the telescope horizontal. If the telescope is turned through 360◦, a horizontal plane of sight is swept out. Vertical measurements from this plane, using a graduated levelling staff, enable the relative elevations of ground points to be ascertained. Consider Figure 3.19 with the instrument set up approximately midway between ground points A and B. If the reduced level (RL) of point A is known and equal to 100.000 m above OD (AOD), then the reading of 3.000 m on a vertically held staff at A gives the reduced level of the horizontal line of sight as 103.000 mAOD. This sight onto A is termed a backsight (BS) and the reduced level of the line of sight is called the height of the plane of collimation (HPC). Thus:


An alternative approach is to subtract the FS from the BS. If the result is positive then the difference is a rise from A to B, and if negative a fall, i.e.

This then is the basic concept of levelling which is further developed in Figure.


The field data are entered into a field book that is pre-drawn into rows and columns. An example of levelling observations from a practical project is shown in Figure. Observations are booked using either the rise and fall or the HPC method.


It should be clearly noted that, in practice, the staff readings are taken to three places of decimals, that is, to the nearest millimetre. However, in the following description only one place of decimals is used and the numbers kept very simple to prevent arithmetic interfering with an understanding of the concepts
outlined.


The field procedure for obtaining elevations at a series of ground points is as follows.The instrument is set up at A   from which point a horizontal line of sight is possible to the TBM at 1A. The first sight to be taken is to the staff held vertically on the TBM and this is called a 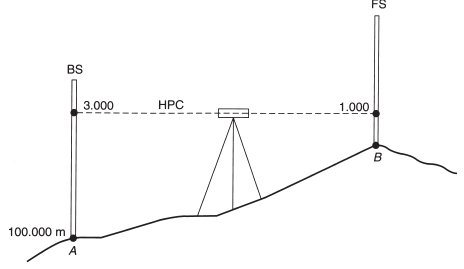 backsight (BS), the value of which (1.5 m) would be entered in the appropriate column of a levelling book. Sights to points 2A and 3A where further levels relative to the TBM are required are called intermediate sights (IS) and are again entered in the appropriate column of the levelling book. The final sight from this instrument is set up at 4A and is called the foresight (FS).

It can be seen from the figure that this is as far as one can go with this sight. If, for instance, the staff had been placed at X, it would not have been visible and would have had to be moved down the slope, towards the instrument at A, until it was visible. As foresight 4A is as far as one can see from A, it is also called the change point (CP), signifying a change of instrument position to B.

To achieve continuity in the levelling the staff must remain at exactly the same point 4A although it must be turned to face the instrument at B. It now becomes the BS for the new instrument set-up and the whole procedure is repeated as before. Thus, one must remember that all levelling commences on a BS and finishes on a FS with as many IS in between as are required; and that CPs are always FS/BS. Also, it must be closed back into a known BM to ascertain the misclosure error.