The above methods have dealt with orientation through a single shaft, which is the general case in civil engineering. Where two shafts are available, orientation can be achieved via a single wire in each shaft.


This method gives a longer wire base, and wire deflection errors are much less critical. The principles of the method are outlined in Figure . Single wires are suspended in each shaft at A and B and coordinated from the surface control network, most probably by multiple intersections from as many surface stations as possible. From the coordinates of A and B, the bearing AB is obtained. A traverse is now carried out from A to B via an underground connecting tunnel . However, as the angles at A and B cannot be measured it becomes an open traverse on an assumed bearing. 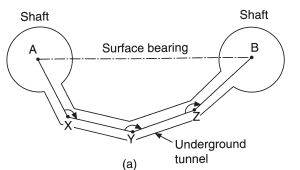 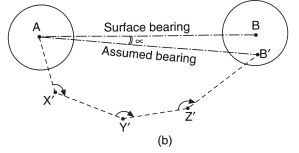 for AX. Thus, if the assumed bearing for AX differed from the ‘true’ (but unknown) bearing by α, then the whole traverse would swing to apparent positions X, Y, Z and B .


The value of α is the difference of the bearings AB and AB computed from surface and underground coordinates respectively. Thus if the underground bearings are rotated by the amount α, this will swing the traverse almost back to B. There will still be a small misclosure due to linear error and this can be corrected by multiplying each length by a scale factor equal to length AB/length AB. Now, using the corrected bearings and lengths the corrected coordinates of the traverse fitted to AB can be calculated.