This method may be adopted when it is impossible to set up the theodolite, even approximately, on the line of the wire base W1W2 . Theodolites are set up at C and D forming a quadrilateral CDW1W2. The bearing and coordinates of CD are obtained relative to the surface base, the orientation of the wire base being obtained through the quadrilateral. Angles 1, 2, 3 and 8 are measured directly, and angles 4 and 7 are obtained as follows:

The remaining angles 6 and 5 are then computed from 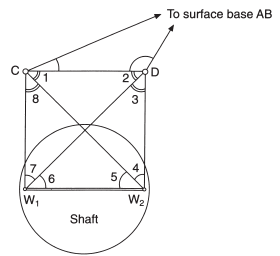 Having found angle 6 from equation , angle 5 is found by substitution in (b). Error analysis of the observed figure indicates:


(1) The best shape for the quadrilateral is square.


(2) Increasing the ratio of the length CD to the wire base increases the standard error of orientation.