Coordinate transformations are quite common in surveying. They range from simple translations between coordinates and setting-out grids on a construction site, to transformation between global systems. Whilst the mathematical procedures are well defined for many types of transformation, problems can arise due to varying scale throughout the network used to establish position. Thus in a local system, there may be a variety of parameters, established empirically, to be used in different areas of the system.

Basic concept:
From Figure it can be seen that the basic parameters in a conventional transformation between similar XYZ systems would be:


(2) Rotation about the three axes, θx, θy and θz, in order to render the axes of the systems involved parallel. θx and θy would change the polar axes, and θz the zero meridian.


(3) One scale parameter (1 S) would account for the difference of scale between different coordinate systems.


In addition to the above, the size (a) of the ellipsoid and its shape (f ) may also need to be included. However, not all the parameters are generally used in practice. The most common transformation is the translation in X, Y and Z only (three parameters). Also common is the four-parameter.


A simple illustration of the process can be made by considering the transformation of the coordinates of P(X, Y, Z) to (X, Y, Z) due to rotation θx about axis OX . 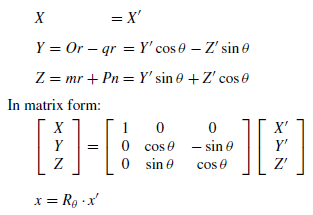 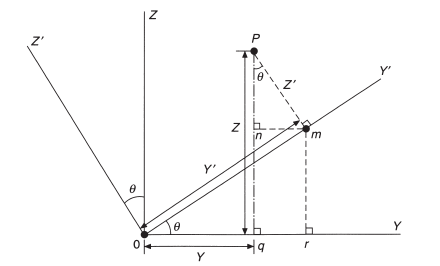 where Rθ = rotational matrix for angle θ
x = the vector of original coordinates
Similar rotation matrices can be produced for rotations about axes OY(α) and OZ(β), giving
x = RθRαRβx

If a scale change and translation of the origin by X, Y, Z is made, the coordinates of P would be 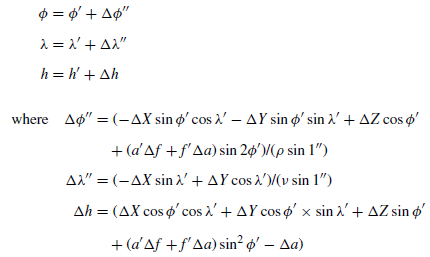 ρ = radius of curvature in the meridian