Whilst the system was essentially designed to use pseudo-range for navigation purposes, it is the carrier phase observable which is used in engineering surveying to produce high accuracy relative positioning. Carrier phase measurement is similar to the measuring process used in EDM. However, it is not a twoway process, as with EDM. The observations are ambiguous because of the unknown integer number of cycles between the satellite and receiver at lock-on. Once the receiver has acquired the satellite signals, the number of cycles can be tracked and counted (carrier phase) with the initial integer number of cycles, known as the integer ambiguity, still unknown (Figure ).

By a process of differencing between the phase received at one station from two satellites, from one satellite at two stations, and between each of these over a period of time it is possible to solve for the relative position of one station with respect to the other. There are two major problems here. One is that, although the position on a single radio sine wave from the satellite may be determined to about 1% of the wavelength, it is not possible to differentiate one sine wave from another.

Therefore, although the distance from a satellite may be computed to a few millimetres (the wavelength on the L2 frequency is approximately 19 cm) there is an ‘ambiguity’ in that distance of a whole number (an integer) of 19 cm wavelengths. A major part of the solution is to solve for this integer ambiguity. This is done by a series of ‘difference’ solutions that are described below. The other major problem is that of ‘cycle slips’. In the ‘triple difference solution’, which is differencing  time, the cycles are counted from the start to the end of the observing period. If one or more of the cycles are missed then the measure will be in error by the number of cycle slips multiplied by the wavelength of the signal. Cycle slips may be ‘repaired’ if more than the minimum number of observations. 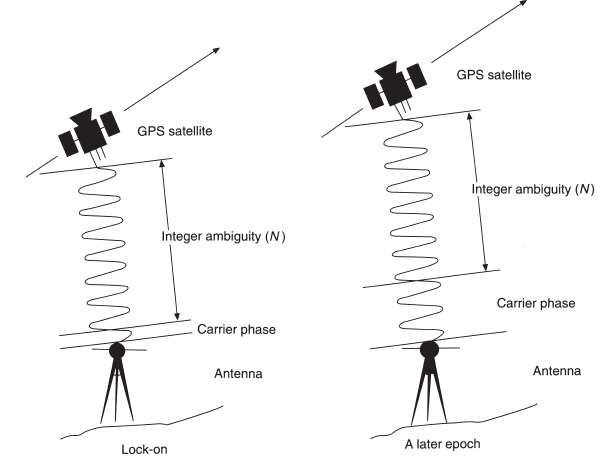 is taken and observations are recorded on a continuous basis. More flexible methods of using the carrier phase observable have been developed. Kinematic surveying involves taking observations at two stations for a period of time, say 10 minutes. One instrument is then moved from station to station remaining for
only a short period at each station. The post-processing again is all on a differencing basis. Semi-kinematic surveying uses the whole number nature of the integer ambiguity and even allows for switching off the instrument between repeated visits to the stations. What follows is a demonstration of the concepts involved in the differencing processes and shows how a solution may be achieved. It does not represent how the software of any specific instrument works. In Figure and in the text that follows, elements associated with satellites have superscripts and elements associated with ground stations have subscripts.