The ellipsoidal surface, representing a portion of the Earth’s surface, may be represented on a plane using a specific form of projection, i.e.


(1) A line on the projection must contain the same intermediate points as that on the ellipsoid.
(2) The angle between any two lines on the ellipsoid should have a corresponding angle on the projection and scale at a point is the same in all directions. This property is termed orthomorphism and results in small areas retaining their shape.
Using the appropriate projection mathematics the shortest line distance on a curved surface between two points, the geodesic, AB in Figure is projected to the curved dotted line ab; point C on the geodesic will appear at c on the projection. The meridian AP is represented by the dotted line ‘geodetic north’, and then:
(1) The angle γ between grid and geodetic north is called the ‘grid convergence’ resulting from the convergence of meridians. 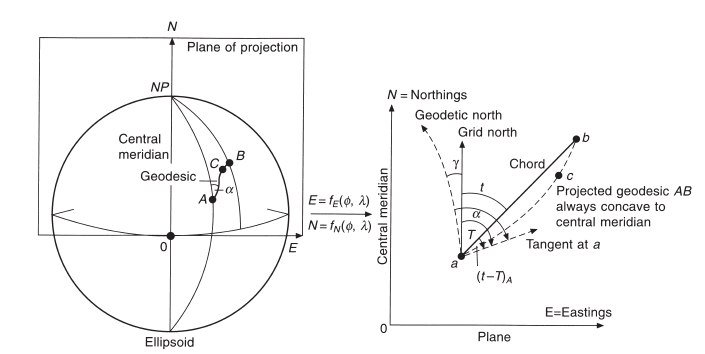 The geodesic represented on the projection

2) The angle α is the azimuth of AB measured clockwise from north.
(3) The angle t is the grid bearing of the chord ab.
(4) The angle T is the angle between grid north and the projected geodesic. From (3) and (4) we have the (t − T) correction.
(5) The line scale factor (F) is the ratio between the length (S) of the geodesic AB as calculated from ellipsoidal coordinates and its grid distance (G) calculated from the plane rectangular coordinates, i.e.


(6) It should be noted that the projected geodesic is always concave to the central meridian. It can be seen from the above that:

The orthomorphic projection that is now used virtually throughout the world is the transverse Mercator projection, which is ideal for countries having their greatest extent in a north–south direction. This can be envisaged as a cylinder surrounding the ellipsoid (Figure 8.17) onto which the ellipsoid positions are projected. The cylinder is in contact with the ellipsoid along a meridian of longitude and the lines of latitude and longitude are mathematically projected onto the cylinder. Orthomorphism is achieved by stretching the scale along the meridians to keep pace with the increasing scale along the parallels. By opening up the cylinder and spreading it out flat, the lines of latitude and longitude form a graticule of complex curves intersecting at right angles, the central meridian being straight. 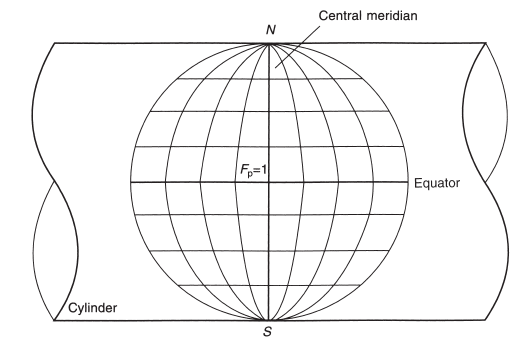