(1) Satellites move around the Earth in elliptical orbits, with the centre of mass of the Earth situated at one of the focal points G (Figure 9.5). The other focus G is unused. The implications of this law are that a satellite will at times be closer to or further away from the Earth’s surface depending upon which part of its orbit it is in. GPS satellite orbits are nearly circular and so have very small eccentricity.


(2) The radius vector from the Earth’s centre to the satellite sweeps out equal areas at equal time intervals (Figure ). Therefore a satellite’s speed is not a constant. The speed will be a minimum when the satellite is at apogee, at its furthest from the centre of the Earth and a maximum when it is at perigee, the point of closest approach.


(3) The square of the orbital period is proportional to the cube of the semi-major axis a, i.e. T2 = a3 × constant. The value of the constant was later shown by Newton to be μ/4π2 where μ is the Earth’s gravitational constant and is equal to 398 601 km3 s−2. Therefore T2 = a3μ/4π2. So, whatever the satellite’s orbital eccentricity, providing the semi-major axis is the same, then so will be the period. ath, and the time taken to complete an orbit. 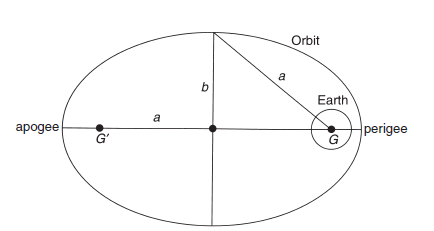 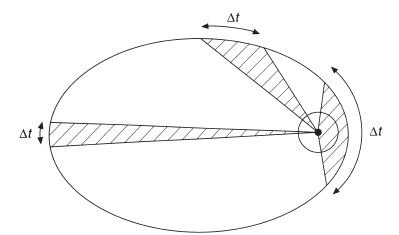 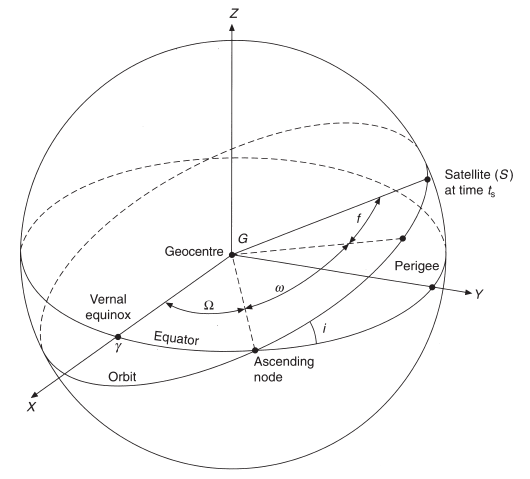 The orbit in space

Whilst a and e, the semi-major axis and the eccentricity, define the shape of the ellipse (see Chapter 8), its orientation in space must be specified by three angles defined with respect to a space-fixed reference coordinate system. The spatial orientation of the orbital ellipse is shown in Figure  where:


(1) Angle  is the right ascension (RA) of the ascending node of the orbital path, measured on the equator, eastward from the vernal equinox (γ).


(2) i is the inclination of the orbital plane to the equatorial plane.


(3) ω is the argument of perigee, measured in the plane of the orbit from the ascending node.


Having defined the orbit in space, the satellite is located relative to the point of perigee using the angle f , called the ‘true anomaly’ at the time of interest. The line joining perigee and apogee is called the ‘line of apsides’ and is the X-axis of the orbital space coordinate system. The Y-axis is in the mean orbital plane at right angles to the X-axis. The Z-axis is normal to the orbital plane and will be used to represent small perturbations from the mean orbit. The XYZ space coordinate system has its origin at G. It can be seen from Figure 9.8 that the space coordinates of the satellite at time t are:

Z0 = 0 (in a pure Keplerian or normal orbit)
where r = the distance from the Earth’s centre to the satellite.