In order to maintain the primary axes of the theodolite in their correct geometrical relationship (Figure 5.3),  the instrument should be regularly tested and adjusted. Although the majority of the resultant errors are minimized by double face procedures, this does not apply to plate bubble error. Also, many operations in engineering surveying are carried out on a single face of the instrument, and hence regular checking is
important.


Test: Assume the bubble is not parallel to the horizontal plate but is in error by angle e. It is set parallel to a pair of footscrews, levelled approximately, then turned through 90◦ and levelled again using the third footscrew only. It is now returned to its former position, accurately levelled using the pair of footscrews,
and will appear as in Figure . The instrument is now turned through 180◦ and will appear as in Figure 5.22(b), i.e. the bubble will move off centre by an amount representing twice the error in the instrument (2e). Adjustment: The bubble is brought half-way back to the centre using the pair of footscrews which are turned by a strictly equal and opposite amount. The bubble moves in the direction of the left thumb. See Figure 5.28. This will cause the instrument axis to move through e, thereby making it truly vertical and, in the event of there being no adjusting tools available, the instrument may be used at this stage. The Fig. 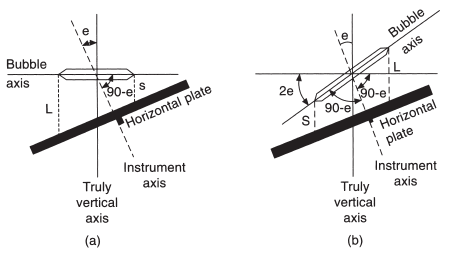 Misaligned plate bubble. (a) When levelled over two footscrews, (b) when turned through 180°

bubble will still be off centre by an amount proportional to e, and should now be centralized by raising or lowering one end of the bubble using its capstan adjusting screws.

3) Spire test (transit axis test):
The spire test ensures that the transit axis is perpendicular to the vertical axis of the instrument. Test: The instrument is set up and carefully levelled approximately 50 m from a well-defined point of high elevation, preferably greater than 30◦ (Figure 5.24). A well-defined point A, such as a church spire, is bisected and the telescope then lowered to its horizontal position and the vertical cross-hair is used to mark a point on a peg or a wall. If the transit axis is in adjustment the point will appear at A1 directly below A. If, however, it is in error by the amount e (transit axis shown dotted in FL and FR positions), the mark will be made at AL. The instrument is now changed to FR, point A bisected again and the telescope lowered to the horizontal, to fix point AR. The distance ALAR is twice the error in the instrument (2e).