The method of directions is generally used when observing a set of angles as in Figure 5.31. The angles are observed, commencing from A and noting all the readings, as the instrument moves from point to point in a clockwise manner. On completion at D, face is changed and the observations repeated moving from
D in an anticlockwise manner.

Finally the mean directions are reduced relative to the starting direction for PA by applying the ‘orientation correction’. For example, if the mean horizontal circle reading for PA is 48◦ 54 36 and the known bearing for PA is 40◦ 50 32, then the orientation correction applied to all the mean bearings is obviously −8◦ 04 04. The observations as above, carried out on both faces of the instrument, constitute a full set. If measuring n sets the reading is altered by 180◦/n each time. 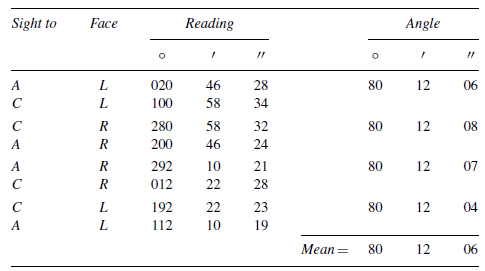 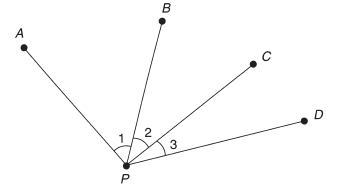 Further considerations of angular measurement:
Considering Figure 5.31, the angles may be measured by ‘closing the horizon’. This involves observing the points in order from A to D and continuing clockwise back to A, thereby completing the full circle. The difference between the sum of all the angles and 360◦ is distributed evenly amongst all the angles to bring their sum to 360◦. Repeat anticlockwise on the opposite face.