A plane rectangular coordinates system . It is split into four quadrants with the typical mathematical convention of the axis to the north and east being positive and to the south and west, negative.


In pure mathematics, the axes are defined as x and y, with angles measured anticlockwise from the x-axis. In surveying, the x-axis is referred to as the east-axis (E) and the y-axis as the north-axis (N), with angles (α) measured clockwise from the N-axis. From Figure , it can be seen that to obtain the coordinates of point B, we require the coordinates of point A and the difference in coordinates between the ends of the line AB, i.e. 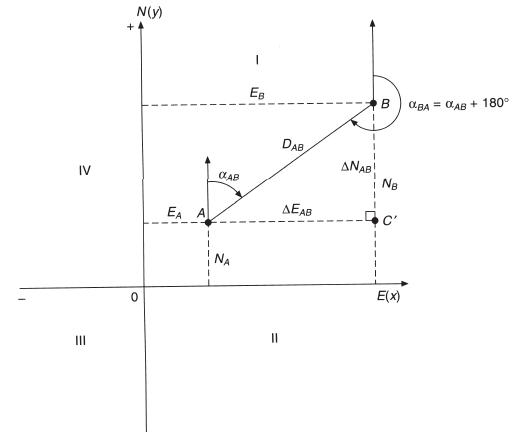 The system used to define a direction is called the whole circle bearing system (WCB). A WCB is the direction measured clockwise from 0◦ full circle to 360◦. It is therefore always positive and never greater than 360◦.

the WCB of the lines as follows:

the reverse or back bearing is 180◦ different from the forward bearing, thus:

Thus if WCB < 180◦ it is easier to add 180◦ to get the reverse bearing, and if >180◦ subtract, as shown. The above statement should not be confused with a similar rule for finding WCBs from the observed angles. For instance (Figure ), if the WCB of AB is 0◦ and the observed angle ABC is 140◦, then the 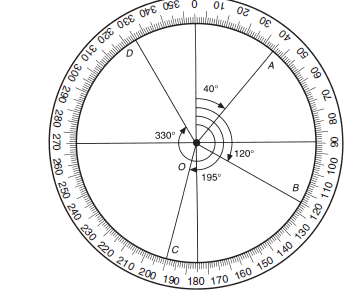 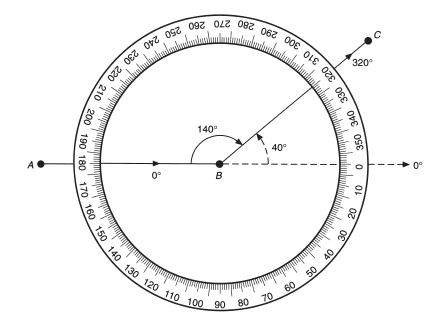 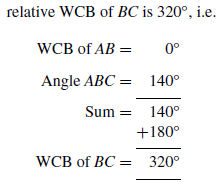