A‘residual’ may be thought of as the difference between a computed and an observed value. For example, if in the observation and estimation of a network, a particular angle was observed to be 30◦ 0 0 and after adjustment of the network the same angle computed from the adjusted coordinates was 30◦ 0 20, then the residual associated with that observation would be 20.

LEAST SQUARES APPLIED TO SURVEYING:
In practical survey networks, it is usual to observe more than the strict minimum number of observations required to solve for the coordinates of the unknown points. The extra observations are ‘redundant’ and can be used to provide an ‘independent check’ but all the observations can be incorporated into the solution of the network if the solution is by least squares.


In the following, the coordinates of new point P are to be determined from horizontal angles observed at known points A, B, C and D as in Figure 7.2(a). Each observation may be thought of as defining a locus line. For example, if only the horizontal angle at A had been observed then all that could be said about P would be that it lies somewhere on the locus line from A towards P and there could be no solution for the coordinates of P. With the horizontal angles at A and B there are two locus lines, from A towards P and from B towards P. The two lines cross at a unique point and if the observations had been perfect then the 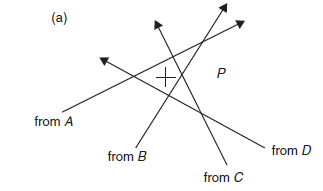 unique point would be exactly at P. But since observations are never perfect when the horizontal angles observed at C and D are added to the solution the four locus lines do not all cross at the same point and the mismatch gives a measure of the overall quality of the observations. Figure 7.2(b) shows the detail at point P where the four lines intersect at six different points. The cross is at the unique point where the sum of the squares of the residuals is a minimum.